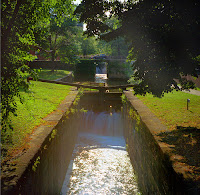 If you ever get a chance to visit the capital of America, please do so. The city reeks of importance and power but is also a walking homage to the political and military history of this giant of a nation.

I spent a weekend here in February last year and you can read all that that by clicking here, and this time I did some of it again but also explored other areas of the city such as the historic Georgetown, the student-y Dupont Circle and the wonderfully named Foggy Bottom.

Foggy Bottom is one of the districts oldest areas, and is a low lying area besides the river and was said to be forever shrouded in fog, hence the name. However today Foggy Bottom is associated with two things. Firstly the nation's State Department HQ is located in the neighbourhood, and second is the main campus of George Washington University (GWU).

Also worth visiting here is the impressive Kennedy Center for the Performing Arts, with its opera house, concert hall, and theatre and the Watergate Hotel, now a huge crumbling relic of times past, including the Richard Nixon Watergate scandal when burglars under Nixon's command broke into hotel rooms in June, 1972, to gather information about the President's election opponents. The word 'gate' now automatically follows any kind of scandal of course.

Dupont Circle is one of many ‘circles’ in DC that are an American attempt at a roundabout and historically the middle of the circle would contain some over the top monument recognizing some historical figure, this originally a chap called Samuel Francis Du Pont and then surrounding the circle would be home to wealthy residents all trying to outdo each other with their grand houses. Today within the circle is a park, a favourite spot for chess players, who play on permanent stone boards and political rallies.

The actual neighbourhood stretches north and one can imagine the bohemian feel of the 1960’s with anti-war marches and street artists and bars smelling of hash. Nowadays it is a student area with bars and pubs smelling of..... you get the picture, although there are actually many nice looking Edwardian looking residences and upscale condominiums, occupied by those government officials that have long since paid off their college debt.

Georgetown is a must see. This part of town pre-dates the establishment of Washington DC and was first settled by Europeans in 1696 and named after the English monarch at the time King George II. Sat alongside the Potomac River and with veins of the Chesapeake and Ohio canal stretching inland the area grew into a thriving port transferring tobacco.

In the first half of the 20th century Georgetown was an industrial hotspot, and many of the original buildings can still be seen, some carefully restored into offices and homes as well as a Ritz Carlton hotel, once a refuse incinerator.

There are some beautiful homes north of M Street, the main commercial artery where the majority of the shops and restaurants can be found. Of course a thriving industrial corridor brought money into the area and some of the houses are magnificent and equally so are most of the very English style terraced homes. And just as I was thinking about this being the perfect place for a small holiday home, my eyes caught a glimpse of a realtors window. Oh well. 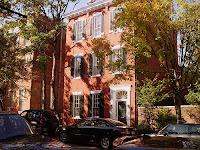 e to politico's, media gurus and investment bankers. In fact despite being famous for having the universities main campus and medical school sat high up on a knoll with it's iconic spires peering over the town, college kids are pretty scarce around these boutique laden streets.
Georgetown University is older than the District itself, having been founded in 1789 and is the nation's oldest Roman Catholic affiliated body of higher education. It's main campus is vast with over 100 acres and includes 58 buildings and of course athletic facilities that put the UK to shame.

Most of Georgetown is quietly residential, strikingly hilly with a number of small parks and a couple of cemeteries, such as Mount Zion and the gothic looking Oak Hill. Near here is Dunbarton Oaks, a mansion where the United Nations was first created in 1944.

The busiest area of Georgetown is around M Street and Wisconsin Avenue, spoiling visitors and locals for choices of restaurants and pubs. K Street gives a good vantage point of the waterfront. Down here by the river there is a lively little area of bars and restaurants, and a river sightseeing tour is recommended.

with M Street at 36th St. The classic 1973 horror film was set in Georgetown, and 75 stone steps that Father Damien Karras hurls himself down can be seen with the blood now cleared up. Actually the steps were heavily padded for the stuntman the throw himself down and it is said that at the time university students charged onlookers $5 to watch from their dorm windows.

The historic Chesapeake and Ohio Canal, which stretches 184 miles between DC and Maryland is certainly worth a stroll. Mule-drawn boats, worked by men and women dressed in early 1800's attire carry visitors on the canal at Georgetown. Hundreds of original structures, including locks, lockhouses, and aqueducts, serve as reminders of the canal's role as a transportation system during the canal era.

All in all this is a beautiful setting, and if you find the whole monument watching in the nations capital a bit tiring, then spend some time in Georgetown. You won't regret it.
¶ 21:12