Not a neighbourhood but a street. Chicago's busiest and the cities main channel from where everything else flows. Michigan Avenue is the actual name of the street but the Magnificent Mile is only slightly more than a mile of a road that actually runs for 17 miles, the majority of which travels south as far as 127th Street but unless you live down that way, 99.99% of the people that visit the windy city are only really excited in about a mile of it.

After the Great Chicago Fire in 1871, the original Water Tower at 806 N Michigan Avenue was one of the few

buildings left standing, and being the most beautiful it therefore became a symbol of resilience and regeneration for the people of Chicago, and eventually came to be the foundation of the Magnificent Mile and still stands proud today. Built in 1869 from yellowing Joliet limestone, the tower stands at 154 feet tall and inside was a 138 foot high standpipe to hold water. The tower (left) provides a sharp contrast to the surrounding buildings and if a nose in the visitor centre takes away too much time from shopping for gifts, then at least stand and gaze at it for a minute or two.

In 1909, Chicago's planners decided to turn Michigan Avenue from a trading post into a commercial street. First they widened the street and then devised a plan for the beautification of it. Four years later the Michigan Avenue Bridge was constructed to draw shoppers from the Loop area in the South to this new commercial district in the North. This encouraged d 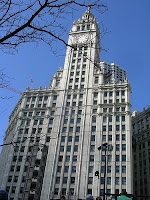 evelopers and a chewing gum magnate called William Wrigley Jr decided to build his company headquarters on land right by the new bridge. The Wrigley Building (right) is still an icon of the city and at night it's lit by floodlights with a clock on the south tower facing all directions drawing eyes to it from the ground level.

Across the street from Wrigley came the Chicago Tribune Tower. The newspaper held a reader competition to design it's new home in 1922 offering a $50,000 prize, better than bingo eh? The winner was a neo-Gothic design by New York architects Howells & Hood. The Tribune Tower is best viewed from the pavement because prior to the construction newspapers correspondents brought back rocks and bricks from a variety of historically important sites throughout the world at the request of the paper's owner Colonel Robert McCormick.

Many of these relics were incorporated into the lowest levels of the building and are labelled with their location of origin. Amazingly stones included in the wall are from such sites as the the Taj Mahal, the Parthenon, the Palace of Westminster, the Great Pyramid, The Alamo, Notre Dame, Abraham Lincoln’s Tomb, the Great Wall of China and the Berlin Wall. In all, there are 136 fragments in the building. Go on take a pen and paper and find them.

After the Wrigley Building and Tribune Tower, other famous buildings were built, and remember Chicago builds them high. However the Depression interrupted all the fun and it wasn't until 1947 that a bloke called Arthur Rubloff, a developer, put into place a plan to give this part of town a make-over and Rubloff is credited with christening this part of the street from the Chicago River to the beginnings of Lincoln Park 'The Magnificent Mile.'

Start your walk at the flag adorned Michigan Bridge facing the Wrigley Building on the left with it's crazy enclosed walkway that joins the two towers on the 14th floor and head north with a credit card, some decent shoes and plenty of time and patience.

First on the left you will come to Nordstrom, well not really because the department store known for it's shoes, is actually a block back, but they cleverly make you walk through a mall to get there. In here however is a massive Lego shop a Chicago Sports shop and a Huge Hugo Boss. Across the street is the Intercontinental Hotel, built in 1929 and just inside a cool cheese and wine bar called Eno. Gap is next door and if you've exchanged pounds for dollars, this will be a cheap as you like!

On the corner of Ontario Street is Coach, keep the girls away from there, and just around the corner is the fishing experts Orvis. Right across the street is one of my favourite lunch spots, Grand Lux Cafe, the portions are huge, the menu is excellent and the decor is, well grand. Back onto Michigan Avenue and there's Burberry, still considered chic and not chavvy in the US, with it's huge Union Jack flag flapping in the breeze and Cartier is across the street for that little something! Approaching 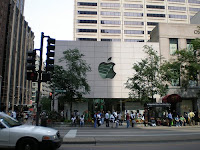 Erie Street now and just behind here towards the lake is the Museum of Contemporary Art. It's free to enter on Tuesdays by the way. Keep walking along the Magnificent Mile and pop in the very modern Garmin store, then join the masses trying on 'sneakers' in the four floors of Niketown and finally go in and play with everything in the Apple Store. If you need a lie down at this point on the other side of the street is the Omni Hotel.

Cross over Huron St and Saks Fifth Avenue is on both sides of the street, just before the Allerton Hotel with it's landmark 'Tip Top Tap' lighted sign on top of it. The Allerton was given a $60m facelift a few years back and it's beautiful towers date from 1924. The next block on the east side of the street presents Tiffany, Pottery Barn and the flagship Ralph Lauren store with it's very own restaurant, RL next door, which is always busy. Next door to that is American Girl Place and if you have daughters under 10, then you will wish you'd never set eyes on it. They have security lines outside at Christmas as the place gets so overcrowded, although later this year it is moving to a much bigger space further up across the street.

Left on Superior Street is my favourite Chicago hotel, The Peninsula. The hotel Bar is the best place to impress a lady in the city, allegedly! Back onto Michigan Avenue and another posh store is Neiman Marcus and this completes the luxury sextuplet of upscale department stores with Barneys just around the corner on Rush Street.

The street then opens up into a nice square with the aforementioned Water Tower and it's recently renovated sister building the Chicago Avenue Pumping Station. It doesn't sound much to look at but it is. Perhaps time then for a little sit down to take in the scene with something from the Hershey's or the Ghirardelli's Chocolate Cafe across the street? Above shining down over you is the Park Hyatt hotel, with the wonderful NoMI restaurant window beckoning you in. The Garden Bar is open all day, grab a Caipirinha and peer over your newspaper at the gorgeous people here, no one will ever know.

A massive Borders is on the corner of E. Pearson Street opposite Macy's, although I much prefer the one on State Street. Ask any Chicagoan though and it will always be Marshall Fields. Behind Macy's is the imposing if quite ugly Water Tower Place. In here eight of the 74 flo 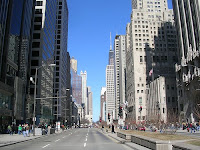 ors are given over to shopping (you had enough yet?) with Abercrombie & Fitch and Victoria Secret competing against each other on who can have the skinniest staff! There is a theatre in here too plus naturally loads of places to eat. Oprah Winfrey is rumoured to own the whole of the top floor of the building.

It's at this point the pedestrian traffic becomes a bit congested as everyone cranes their necks 1,500 feet into the sky to gasp at the John Hancock Center (very top right), the 3rd tallest building in the world if we include antennaes in the race. A cocktail in the 95th floor Signature Room is an absolute must-do for visitors. Below ground positioned around a fountain is The North Face, every Chicagoan's favourite winter staple and next door the Cheesecake Factory offloads about a gazillion calories to still starving shoppers. Opposite on the corner of Michigan and Chestnut is the Fourth Presbeterian Church, a visual and physical oasis amid the high-rise hubbub. Every Friday at noon concerts are held in the Church's Sanctuary. 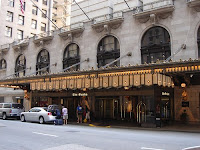 The Whitehall is a nice boutiquey hotel, with a decent bar but from here you cannot fail to see the iconic Drake Hotel. This long time Chicago landmark is an Italian Renaissance style building built in 1920 with 537 bedrooms, 74 suites, a 6-room Presidential Suite just in case the future President Obama wants to stay in town after a few sherberts! The Drake has featured in many movies including Mission: Impossible and afternoon tea here is another thing to add to your intinerary. In this little stretch of street the shops get rather high-end with Gucci, Bulgari, Louis Vuitton (don't knock it, you may need another suitcase!) and Chanel. Good people watching if nothing else.

Then as the Magnificent Mile gives way to Lincoln Park and views of Lake Michigan at 900 N. Michigan the busy Bloomingdales holds court in a 871 foot limestone tower. Bloomies only has part of this building though, the Four Seasons Hotel occupies the middle 14 floors and there are a number of other shops worth a nose too. On the 5th floor is Frankie's, an excellent pizzeria. Skylights are a bit of Chicago institution and the four 'lanterns' on top of the Bloomingdales building change colour depending on the event. The same happens at the Hancock, Sears Tower, Wrigley Building, Aon Center and the Merchandise Mart.

Shop to you drop, eat, drink and be merry. The Magnificent Mile with it's wide pavements, street entertainment, beautiful and ingenious flower beds that tell stories is almost unavoidable on a trip to Chicago. Of course you can turn your nose up at it, but your stories of the windy city when you get home will not be complete.  ¶ 16:07