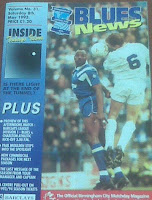 Birmingham City 1-0 Charlton, Saturday 8th May, 1993
Of course memories of St Andrews for Charlton will always be about a game that the Blues didn't even feature in but over the years we have had a number of battles with Jasper Carrot's finest, and some of those actually on the pitch.

I remember most vividly our visit to St Andrews on the last day of the 1992/93 season when Birmingham had to win to secure their safety in what was Division 1 and we were comfortably ensconsced in midtable. City's biggest crowd of the season by far, 22,234 had turned out to cheer them to victory and roughly only around 500 Addicks, including me and a few mates, had been curious enough to witness what would have happened if they didn't. The maths were simple. A Birmingham win would have seen them safe, anything else and they were down with Bristol Rovers and either Cambridge United or Brentford and we would have got our heads kicked in!

What else was going on that day to keep the end of season interesting for us was up in the Premiership where a certain team of the 80's were at Arsenal hoping to avoid a heavy defeat which combined with an Oldham win at home to safe Southampton would have seen our friends relegated.

Anyway the game began in a tense atmosphere. The home fans were noisy and we felt we were there just to make up the numbers and in truth I expected us to just roll over. But we didn't. Terry Cooper's team were nervous and in the first half we played the better football and at half time the locals were getting edgy and a lot of their attention was being turned on us away fans couped high up in the corner.

Meanwhile Palace were losing by a single goal and Oldham were winning but it wasn't enough.

Birmingham started brighter in the 2nd half and in the 56th minute they finally took the lead when Paul Moulden scored from close range and St Andrews erupted. Phew I thought because all around us the locals ire was being turned on those of us up from the south on a day out.

Birmingham had a couple of more chances up at our end but couldn't put the game out of reach and although Charlton had had a lot possession we hadn't really created anything and most of our attention was turned to those who had radios pinned to their ears on what was happening at Boundary Park and Highbury. Oldham had gone 4-1 up but Arsenal needed to score again.

Back on the pitch we watched as the ground fell into a complete state of nervousness and we pushed for an equaliser. Corners were forced, Newton made a couple of dangerous runs and Leaburn, who had come on as a substitute went close with a header and we worried for our safety as we went with three upfront

Then as news came through that Arsenal were 3-0 up at home to Palace, our jubilation being confusingly watched by Blues fans, almost turned to despair, if you were there you'd known what I mean, as Peter Garland struck a superb long range effort that had Thomas beaten and bounced back off the bar. Blimey what were they doing to us as we continued to push for a point that we didn't need?

Up at Boundary Park Southampton had pulled it back to 4-3 but Oldham held on, and so did Birmingham, and Palace were to join us in the 2nd tier and after getting the fright of their lives so were Birmingham as the locals poured onto the pitch at the final whistle making it over to our penned in corner but only to befriend us and offer us scarves. How different that might have been if Big Fat Pete would have scored with a couple of minutes to go.