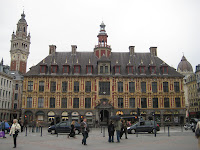 5 hours was never going to be enough to experience a city that since it’s birth 10 centuries ago has been fought over by the County of Flanders, Flemish, Austrians and the French. In fact it’s proximity to Belgium gives Lille its biggest influence where moules-frites and waffles replace frogs legs and cheese.

Lille by train is less than an hour from Ashford and makes a day trip very accessible, even though the customs bloke thought that we had booked our tickets wrongly. “You’re coming back later?” he proclaimed. 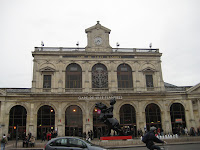 We began from the Lille Europe station next to the huge modern Eurolille mall incorporating an office building resembling a huge ski-boot. Then walking down past it’s 19th Century grandmother the Gare Lille Flandres (left), which in fact is the original Paris Gare Du Nord transported brick by brick from the capital.

At the busy intersection we were met by a whole family of some very strange baby dragon hybrid statues lining the Rue Faidherbe, which led us to the main hub of the city at the Place du Général de Gaulle (Grand Place), easily recognizable as the central point for celebrations, festivals and demonstrations. In fact later we came across a handful of t-shirted plac 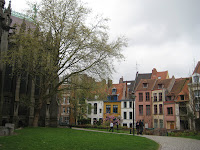 Tables spilled out onto the Place du Général de Gaulle as people ignored the damp weather by sipping espresso’s. A fountain and statue is in the middle and the Flemish influenced square is surrounded by beautiful buildings such as the Vieille Bourse (the Old Exchange), built in 1653 and architecturally striking (top right). We had a closer look but the building just appeared to be selling second hand books with no sign of what the exchange originally exchanged.

We were on the hunt for lunch and headed north into Vieux Lille. This is Lille's old town and is a delightful discovery of charming cobbled streets with cafés, galleries and some eye-catching shops inclu 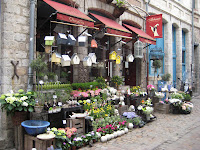 Vieux Lille's oldest street is the Rue de la Monnaire and gift hunters won't be disappointed along here. Benoît (77 Rue de la Monnaie) the chocolate shop called our name and a little side street called Rue au Peterink was a haven for foodies and fashion seekers.

Beyond the cobbled streets is the Quartier Royal, mainly a residential area and this led up to the Canal de la Moyenne Deûle. We crossed here and found the star shaped fortress that is The Citadelle, a design that inspired the US Pentagon and was once home to 1,200 of Louis XIV's soldiers. It is still a secure garrison and a drawbridge is about as close as you can get.

By this time my son was desperate for the zoo, as all around we could hear the shrills of birds and the chatter of the monkeys. Lille's free Parc Zoologique encouraged me to take my son here for his first French trip, and it was worth it. Nestled in the Citadelle Park, it was r 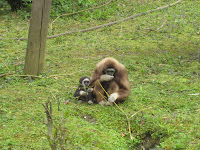 eminiscent of Chicago's Lincoln Park Zoo and we stared at the many rare birds and then sought out the monkeys, showing off as always. Rhinos, zebras, llamas, turtles and my son's favourite, the reptile sanctuary were all here too.

We then made our way back down the busy Rue de la Liberté before turning onto the main shopping thoroughfare of Rue Nationale before completing our 5-hour stint back at the Eurostar terminal at Gare de Lille Europe.

There were endless choices of places to eat and we choose pretty well with Le Buzz. The waiter's minimal English gave us ample chances to use our pigeon French, although my son was disappointed that he could not use his well rehearsed "Bonjour, I'll have the frog's breast, not the legs s'il vous plait." He had to settle for steak-frites but it was a delightful restaurant and we met the 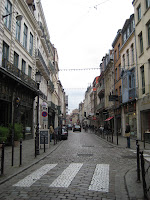 only two English people all day at the table next to us - one of the huge benefits Lille has over Calais in my opinion.

We found some superb cheeses and stocked up on camembert at F & PH Armand's Artisan Fromager Affineur (54 Rue Basse) and then for our final treat we had what we agreed were probably the best waffles in the world at Meert.

5 hours wasn't enough but we crammed a lot in and I'd love to go back for a longer period. The Christmas Market, Marche de Noël, is supposed to be fantastic as is September's Braderie de Lille when the city turns into one huge street market. Lille has a complicated past but it is easy to love.  ¶ 17:00