Friday, 12 November 2004
It's not like the good old days - Luton '89 Luton Town, Kenilworth Road, 2nd May, 1989
Post the Millwall chair throwing evening at Kenilworth Road in March 1985 Luton Town, thanks in no small part to MP and hated chairman David Evans, had changed from being pitied to detested by every football fan in the country.

The reasons for this were 3 fold. One was of course Maggie Thatcher arse licker David Evans, the next was their horrible, nasty plastic pitch (they might be coming back!) and lastly it was their membership scheme totally banning away fans.

Stories of away fans efforts to gain entry to the ground were legendary in pubs & bars around the country. I knew some people (non Luton fans) who were actually members. In fact all the ban did was to make away fans want to go to the shit hole even more. Just like me and my brother during the 1988/89 season.

I had been to Kenilworth Road before and it fully deserves its listing as one of the 10 crappiest grounds in the country as decreed by an Observer poll recently.

It was a huge game for us, we were once again fighting relegation during our 3rd season back in the top flight and Luton were down there with us. We had been playing well but a loss on the Saturday before away at QPR had still left us with a battle on our hands. There were only 4 games left in the season and like other Charlton fans we knew we had to get into Kenilworth Road to give them our support.

This was our source - a friend of mine worked with a bloke whose mate's brother was a Luton fan. In this case of Chinese whispers my friend had managed to explain that we were neutral football fans who had never been to Kenilworth Road and wanted to go to a game, the Charlton game in particular. If my memory serves me correctly Luton fans were limited to how many additional tickets they could purchase. They also had to prove they were not for visiting supporters. He had got us four and for his trouble we said that we would meet him after the game and buy him a pint.

We had met at Farringdon Station dressed in work clothes with not an inch of red on (which lets face it was normal for any away game back then) and were told to expect a lot of questions from police and stewards on the way into the stadium and at the turnstiles. Bedfordshire Police were enforcing the ban and we even had our match tickets checked during the train journey to Luton.

We had already recognised some familiar faces and gave each other a knowing nod and a smile but none of us were prepared for what was waiting at Luton Station. The Police had formed a human line and every single person was searched, had their ticket checked and sporadically asked questions. I gave the copper a smile as I went to walk past him. "Oi, what is the name of Luton's goalkeeper," he said to me. I looked at him with a puzzled look and said "why, Les Sealey." And that was that. I was officially a Luton fan for the night!

The ground was grim, with barbed wire turnstiles and electronic gates, surrounded by tiny terraced houses - the Kohlerdome was then and still is a pipe dream. Stewards and cops hung around the entrances - the club's police bill must have been higher with the away ban than it would have been without it - and after a few more stern looks at both our tickets and our faces and we were inside the ground.

The four of us stood in the Kenilworth End which was historically the home end. I felt a real nervousness about me, tingled with excitement. It was like when you were at school and you had done something wrong but had got away with it.

It didn't take long after the kick off to realise that we were not the only Addicks in the ground. As any football fan will tell you; one of the hardest things to do is stand amongst rival supporters and show no signs of passion or support for your team but at this game not only were we in the wrong end but we shouldn't have been there at all. All around me I saw familiar faces grimace and kick every Charlton ball. I felt proud but nervous and anxious at the same time.

It was a big game for the Hatters too and their fans were noisy although I thought I could hear the odd strain of "Come on you Reds". Typically however we were behind after just 11 minutes when Wilson scored and then after 24 minutes Colin Walsh put into his own net and the people around us were wondering why we didn't share their enthusiam to what was going on out on the pitch, although I suspect that they had seen many an opposing fan in their end during the season.

Just as we were hoping we could make it to half time only 2 down, Wilson scored his 2nd to make it 3-0 and then Luton legend Mick Harford scored a 4th and it was all over. The break seemed like an eternity with only our achievement of getting into the ground worth whispering about. Only Charlton could make you suffer like this. Months of planning, a near military operation to get into the ground, a buzz of excitement as we kicked off a must win game and 4 goals down 45 minutes later!

Paul Williams came of the bench at half time to replace the late Tommy Caton and join Garth Crooks up front. The ineffective Crooks was then substituted to sarcastic applause from us and Andy Jones (where is he now?) came on. Now, Jones was a bit of an enigma to me. He had scored a hatful of goals for Port Vale and had already made his Welsh debut when Lennie Lawrence signed him for 350,000 at the start of the 1986 season. At that time it had looked like a worthwhile gamble but he never settled and his time was disrupted by injuries. 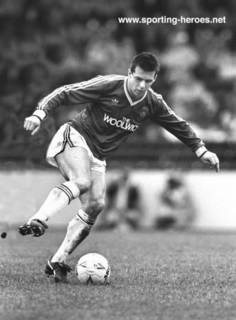 Nevertheless to aid Jones' most recent injury he was sent back to Vale where he was hero worshipped and had done well and I remember thinking we should capitalise on this and play him from the start. So his introduction in the 62nd minute gave us a glimmer of hope, albeit a blinkered one which did increase after Jones scored following a burst of pace in the 71st minute but we were soon brought back from la-la land 6 minutes later when Roy Wegerle scored to make it 5-1.

Andy Jones did score again, at least to prove mine and I'm sure his point that he should have started the match ahead of the lazy, television destined Garth Crooks (where are they now?).

After the match we had to meet up with those blokes who got us the tickets to buy them a pint which further extended our miserable evening stuck in godforsaken Luton, although looking back it wasn't the result that mattered it was the estimated 500 Charlton fans who had made a mockery of the away ban and the ridiculous train station and city centre checkpoints just to support their team.

We did bounce back to prove the Luton game was a blip, winning our next two games, both at home, to stay another season in the top flight and finish above Luton.