The cab driver was Polish and the late 1800's this area was dominated by Polish immigrants. Bucktown was named for the goats (Bucks) that were kept in many of the poorer Polish residents' backyards. The Poles named their streets in remembrance of their homeland - Kosciusko, Sobieski, Pulaski and Leipsig. In 1913 the City Council, prompted by a Bucktown-based German contingent with (obvious) clout, changed the Polish-sounding street names to Hamburg, Frankfurt, Berlin and Holstein. Anti-German sentiment during World War I brought about another name-change - this time distinctly Anglo-Saxon. McLean, Shakespeare, Charleston and Palmer Streets all still exist today.

After the war the Poles and the Germans got replaced by the Puerto Ricans and Mexicans and it wasn't until the 1980's when the artists moved in, followed in the 1990's by moneyed city workers and the regentrification of the area was well underway.

The Artists have now all but disappeared moving further south to Wicker Park and Ukranian Village, forced out by rising rents and property values.

Bucktown is roughly bounded by Fullerton Avenue to the north, Western Avenue on the west, the Kennedy Expressway towards the east and the Milwaukee disused railway tracks to the south. The three-way intersection of avenues Milwaukee, Damen and North is the edgy hub of Bucktown. Around here there is an intriguing mix of coffee shops, theatres, nightclubs, trendy restaurants, boarded up shop fronts and clothes stores.

At the centre of the intersection is the remarkable triangular Northwest Tower Building (1600 N Milwaukee Ave), the Double Door (1572 N Milwaukee Ave) is a popular live music venue and further down the street is an eclectic mix of bars, second hand clothes shops and stores that time seemed to have forgot, such as the Singer sewing machine service center (picture below). Brunch is an American institution and my favourite spot is the Bongo Room (1470 N Milwaukee Avenue), a Sunday morning must if you are visiting the city.

North Avenue is worth a walk down just to visit Quimby's bookstore (1854 W North Ave) and Piece (1927 W. North Ave) is a great place for a Pizza, a real one not that heart attack endusing thick Chicago-style pizza!

Walking north on Damen Avenue is an entirely different proposition to its neighbouring streets as modern new condominiums compete with expensive restaurants and trendy furniture and clothes shops. The Northside Bar & Grill was where I spent last New Years Eve and is a popular bar, once a haunt for the 2001 Real World Chicago cast. The show was centered on Bucktown.

Caffe De Luca (1721 N Damen Ave) is a great place for a snack and a coffee, Apartment 9 (1804 N Damen Ave) is a nice if expensive men’s clothes shop and Potbelly reputatedly sell the best sandwiches in Chicago in an old abandoned fire station (1625 N. Damen Ave).

Many of the tree lined streets that span east and west off Damen Avenue host some good examples of old cottages and new mock Victorian walk up houses as well as several architecturally pleasing looking churches, a legacy to the early immigrants. A leisurely walk along Wasbania Avenue will take you away from the busy main streets. You will also find the retro Italian restaurant Club Lucky (1824 W Wabansia Ave), which is a cool place in the summer.

This part of town was once a well travelled former Indian trail and only 20 years ago controlled by gangs but although Bucktown retains a bit of raw edginess, there is no wonder that its tree-lined streets and proximity to downtown has bought another new chapter to this area. 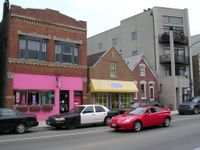 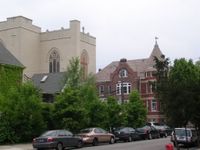 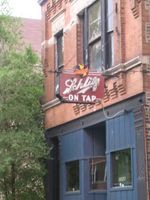 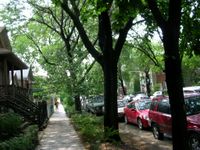 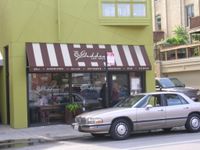 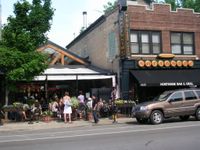 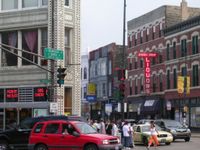 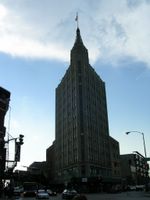 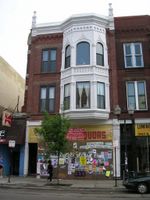 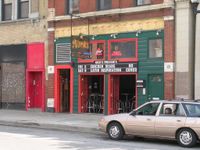 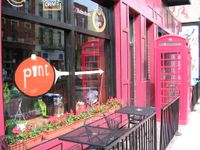 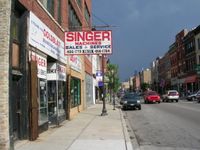 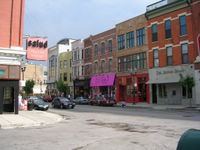 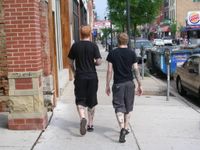