Sunday, 25 September 2005
Oman With history dating back to 5,000 BC when frankincense trading was at the centre of everything, the country of Oman is a land rich in culture and diversity.

But up until 1970 it was all a bit of a secret to the outside world. Whilst neighbours Kuwait & Bahrain were making names for themselves internationally, under the reign of Said bin Taimur Oman was an economic and political backwater with huge poverty and a very insular outlook. In 1970 Oman had just two schools, two hospitals and just 6 miles of road.

Not anymore. In a bloodless coup, covertly helped by the British, Sultan Taimur’s son Qaboos bin Said took over the throne whilst his Dad lived the rest of his life in the Grosvenor Hotel.

In 35 years the much-loved Sultan Qaboos has created a modern day renaissance with massive investment in the countries infrastructure and with a particular emphasis on education. Kids in the street will be talking a thousand words a minute in their native tongue and then turn to you and ask in perfect English “How are you?” Always a humbling experience.

Bearing in mind the countries size, remoteness and terrain, having water, electricity, health centres and schools in even the remotest mountain villages with roads leading to them is no mean feat. So its not surprising then that Sultan Qaboos, who drives and flies himself around the country to meet his people, is much revered in the country.

Oman has limited oil supplies and therefore you will see a lot less of the ‘costly’ expats than you do in the UAE. Natural Gas is an important export and the new port at Salalah in the south of country is already generating a lot of container business. Agriculture, mainly carried out by the mountain people called Jebbali’s is also invaluable.

Tourism however is a recent thing in Oman, centered around the old walled city of Muscat, it suffered initially after the American invasion of Iraq (American’s are very rare around these parts, but not necessarily unwelcome) it is gathering quite a reputation as the place to come (think Dubai 10 years ago) and the Oman government continue to seek overseas investment.

Most of the investment to date seems to be coming from the Far East with the new 630-room Shangri-La Hotel due to open early next year.

The Omani’s were incredibly friendly people and although generally more relaxed on their Muslim principles than some of their Arab neighbours, their culture, faith and attitudes are very important to them. Public modesty, particularly for women – ankles, wrists and hair to be covered – is respected and in certain public places avoidance of this tenet is met with strong disapproval.

Expect to be stared at, especially if you are a blonde woman, but this is in wonder and not threat. The Omani’s are known to invite complete strangers into their house for coffee and some goat curry.

Much different to Dubai but an excellent contrast, the beaches are untouched and fabulous, whales and dolphins swim of the shoreline (although a choppy morning out on a boat only very nearly reproduced my breakfast and not dolphins), far more authentic souqs and restaurants than can be found in Dubai and all for about half the price. One night dinner with beers cost about 10 quid for two.

A must-do is a bit of Wadi-bashing. Wadi’s are dry mountain river beds that are flooded for half of the year and desiccated for the rest of the time. Get a good driver and a 4WD and fly through the Wadi’s and ‘surf’ up and down the sand dunes. Great fun.

Also take a walk through the ancient port of Mutrah, past the fish souq and along the corniche into the Mutrah souq (stop at the Al-Ahli coffee shop for a fruit cocktail) and on towards the walled city of Muscat where the Sultan’s Palace is (currently being refurbished) and various impressive government buildings.

The Grand Mosque was a present to the people from Sultan Qaboos and is breathtaking inside where sits the worlds biggest carpet in the world. We were told it took 600 Iranian women four years to weave.

The Southern Indians and the Lebanese also influence the food here. Try Mumtaz Mahal for Indian, Automatic for Lebanese and the pretty Khargeen Café for an Arabic experience. The best restaurant belonged to the Chedi Hotel. For a dry country the wine list is impressive, if expensive. Alas, as we found out, Muscat is not the home of wine!

Oman was a relaxing time after the rush of Dubai, unless you are very adventurous and want to spend some time camping amongst the Bedouin nomads in the Jebel Shams (3,075m high) or searching for turtles along the Ras-al-jinz coast or explore Dhofar, a world away from Muscat across interminable rock desert, then Muscat and its surrounding ancient towns is a place to chill before it becomes like its bigger and older brother up the Gulf coast. 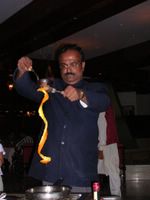 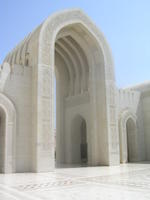 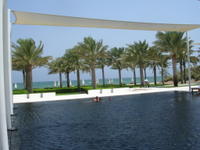 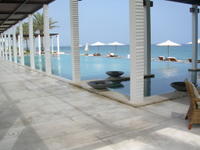 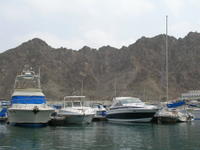 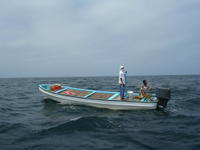 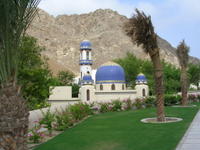 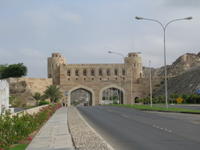 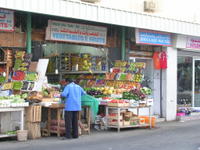 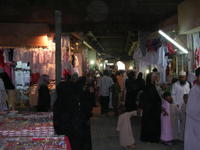 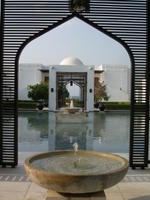 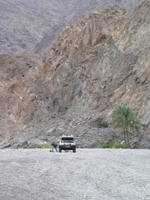 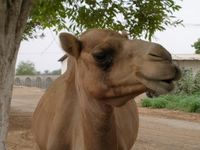 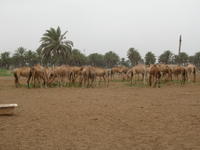 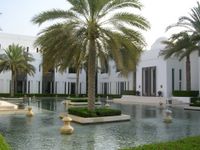 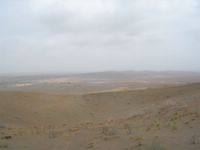