Monday, 10 October 2005
Munich revisted A few week's back I spent a nice warm weekend in Munich. The birthplace of the Nazi party was heavily damaged during WWII but unlike a lot of other German cities which were just left embarrassed by the whole affair, Munich was extensively rebuilt.

Munich can be a culturally confusing place. It is known in equal measures for BMW, bike riding, opera, football, beer, high-tech companies, fashion and lederhosen.

Yes people do actually wear lederhosen and yes they drink a shed load of beer and this was a week before Oktoberfest. In a space of two weeks 3,000,000 pints are sunk in huge tents and there is probably that much again swilling around on the floor. There are more than 1,300 breweries in Munich, the oldest of which goes back to the Augustinian monks in 1328.

The Munich Beer Regulations are the oldest written food laws in the world. They stipulated that beer could only be brewed using barley, hops and water. After its invention the culture yeast was added as a fourth ingredient. This process called Reinheitsgebot was actual law up until 1988 but it is still adhered to by virtually all German brewers.

Beer gardens dot the city and they host thousands of people jugs of frothy beer. The worlds biggest sits 8,000 at Hirschgarten.

Because of work commitments I only really had a day and a bit to get around town, but I crammed as much in as possible starting with brunch at the Glockenspiel Cafe in Marienplatz, where Chancellor Gerhard Schroeder's was holding a rally a week before the German election.

The famous Glockenspiel on the front of Neues Rathaus chimed at noon. Watch for the cuckoo at the end. From Marienplatz we walked past the place where the open-air food market Viktualienmarkt resides in the mornings, regrettably it shuts up at 1pm and we were too late to see the Bavarians buying their sausages.

We walked along Dienerstrasse and mooched around the cities most famous food store Dallmayr, the Bavarian equivalent to Harrods food court, then from there we walked past the big designer labels on Maximilianstrasse and Munich’s flagship Hotel Kempinski.

The impressive Residenz and its glittering state rooms were painstakingly repaired over a period of 40 years after WWII. At Odeonplatz monumental buildings surround the square at the start of the cities two finest boulevards.

Ludwigstarsse had a very Parisien feel, with a host of coffee shops and bars. This leads into Leopoldstrasse and the 56ft high Walking Man statue designed by American Jonathan Borofsky, which stands outside the art-deco Munich Re office.

The shops don't open on a Sunday, how refreshing is that? So instead of kids being dragged around shops, families spend the day walking, riding and just hanging out around the city. We walked through the magnificent Englischer Garten with its fast moving river, beer gardens, lawns, Japanese Tea House and horse trails.

We had breakfast at a place on Koeniginstrasse Sunday morning which I can't remember the name off but it was a great setting by the Englischer Garten overlooking some stables. It was full of families.

A weekend in Munich cannot be without a visit to the Hofbrauhaus (AmPlatzl 9), full of tourists but a great experience. Lets face it German food is not the best, unless you are partial to pork knuckle and lard, however a good reasonable place to try some local stuff is Spatenhaus (Residenzstrasse 12). For something less German try Conran's bar and restaurant Lenbach (Ottostrasse 6).

I didn't get to see the Allianz Arena as it is out of town (on the way to the airport) but it does look very impressive and the outside of the stadium changes colour depending on whose playing Bayern or 1860. It will host the 2006 World Cup opening ceremony on June 9th. 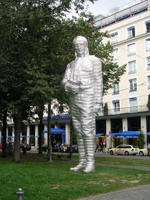 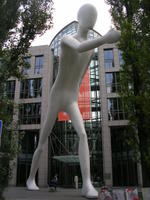 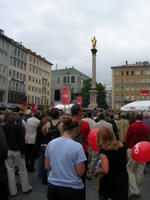 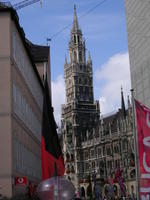 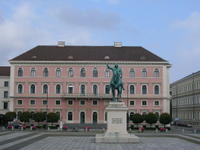 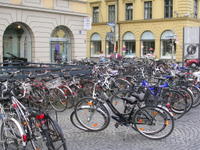 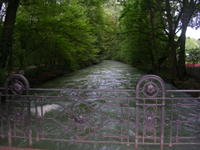 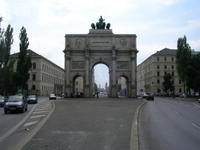