Saturday, 22 October 2005
My Chicago - #3 Wrigleyville With all the focus in the city down on the Southside, I took the opportunity to avoid all the media foucs and visit the area that the city has suddenly forgotten - Wrigleyville.

This pocket of what is more generally known as Lakeview changed forever in 1914 when Zachery Taylor Davis built what is arguably the most treasured sports stadium in the country.

Originally known as the North Side Ballpark, it then went through a series of manifestations -Weeghman Park, Whales Park and Cubs Park before a certain Mr William Wrigley bought the team and renamed the stadium after his family. That was in 1926 and not much has changed since 1937 when the iconic scoreboard was added along with the famous ivy in the outfield walls.

The last major change to Wrigley Field was in 1988, when floodlights were added but walking by today the diggers were in the stadium working on the long proposed bleacher extension.

From the outside the famous ballpark is less than impressive but believe me there are few better sporting feelings than being inside on a warm summer's day with 39,000 Northsiders cheering on their team.

Real Estate agents dubbed the surrounding area near the junction of Addison and Clark Wrigleyville and the moniker has stuck. The neighbouring streets give way to literally hundreds of bars - all packed before, during and after a game - and tall, thin town homes which are invariably split into apartments. Then on the roofs of these buildings that look over the outfield in Waveland St and Sheffield St, roofs have given away to terracing. A quirky but money-spinning feature.

It is said one resident avoided the temptation to cash in their roof for years until Budweiser offered the owner a $1m to paint the back of it red and add the Budweiser logo. Money talks and you can see the Bud logo from most seats in the stadium.

Wrigleville extends from the Addison Red Line train station in the east to N Southport Avenue in the west and is cushioned by W Grace St north and W Roscoe St southwards.

Apart from busy loud bars, the area does have some leafy streets and I particularly like wandering along N Southport Ave (I used to live a mile or so south on this street).

A good place to linger over a coffee and a slice of cake with the newspaper is Julius Meinl (3601 N Southport Ave) and I like to peer at the wine racks in Que Syrah (3726 N Southport Ave) for wines I can't afford. Ask about the tastings. 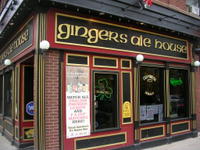 It is not in the wine shop that I spend most of my time, it is in Gingers Ale House on 3801 N Ashland. It is the best bar for 'soccer' in the city. It opens at 6am Saturday morning for the early games, with the Irish barmaids looking like they have had half hours sleep (they probably have), they serve a host of beers and simple pub grub. I was there this morning, its ex-pat heaven and it could be a million miles away from the baseball mecca just half a mile up the road. 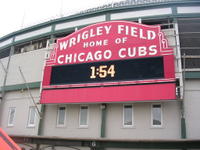 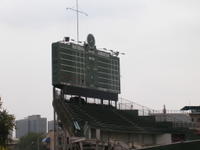 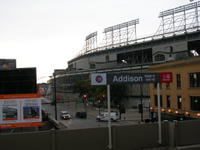 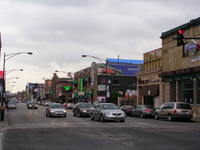 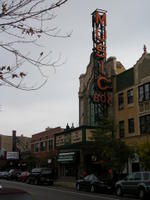