Wednesday, 15 February 2006
Washington DC The home of America's federal government is the District of Columbia, once a marshy swamp, now a walking museum of America's history. The City, just 67 square miles in size, is divided into 4 quadrant 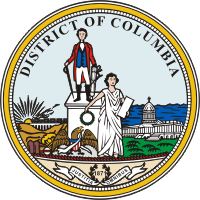 s with the US Capitol building at it's epicentre.

I spent 4 days in the Nations capital last weekend, and was impressed by it's huge open spaces and wonderful sight lines, white marble buildings replacing the usual American city skycrapers.

Named after the first president George Washington, who lived in nearby Alexandria, the city was designed by Pierre Charles L'Enfant and became the capital in 1790. The British forces burnt what there was of the city in 1814 and it wasn't until after the American Civil War in 1861 that the city took on any kind of real prominance, other than in name.

The weather in DC last weekend (unlike now) was unseasonally mild, and a quieter world capital city would have been hard to find, which was great in allowing us to walk wide boulevards alone and stroll straight into the tourist spots unhindered.

First stop was the obvious place to start, the White House. Located at 1600 Pennsylvania Avenue NW, the official residence and principal workplace of the Mr GW Bush was built after Congress established the District of Columbia as the permanent capital. President 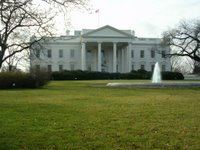 George Washington helped select the site (although it is said that out of embarrassment he never called the city Washington). An Irishman, James Hoban, was the architect and it took 8 years to complete at a cost of $232,000.

We were told that you could book guided tours. What we were never told was these need to be booked 6 months in advance with your local Congressman! So it was from the outside that we peered in wondering what was going on in the President's head on a Friday morning. Probably not a lot. One thing that surprised me was that there was just the one anti-war demonstrator sat outside.

Much of the White House is underground and therefore does not look that gigantic on first impression. In fact the building is 55,000 square feet in size and hosts a movie theatre, a jogging track and a bowling lane. 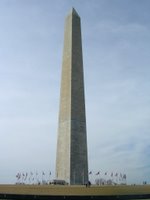 re we walked past the mostly cordioned off Ellipse to the south of the President's Palace and onto the mgnificent 555 ft Washington Monument. The obelisk towers over everything in the Nation's capital and due to lack of funds and the civil war took 40 years to finish. For a year it was the world's tallest building until the Eiffel Tower was finished in 1889.

Once inside you have a choice of 897 steps or a 70-second elevator ride. I took the elevator, which takes you up to the viewing gallery with magnificent aspects over four sides of the city.

The Washington Monument's reflection can be seen in the aptly named reflecting pool stretching 2,029 feet out to it from the Lincoln Memorial.

The Lincoln Memorial was my favourite piece of architecture. Solemn and humbling a huge President Abraham Lincoln, commonly considered to have been America's finest President, sits high up in a chair within a doric temple presiding over his people. Finished in 1922 inscribed on one side of the statue is Lincoln's second inaugural address and on the other is his famous Gettysburg Address. In front of the Lincoln Memorial Martin Luther King famously gave his "I have a Dream" speech in 1963.

Lincoln was shot and killed on April 14, 1865 during a performance in the cities Ford's Theater. 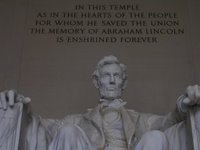 A long walk over the Potomac River took us to the 624 acres of America's most famous resting place, Arlington Cemetery. 290,000 people are laid rested in the cemetary and we were told that 24 burials are conducted every weekday! Anyone can be buried here but mostly the row upon row of gravestones belong to servicemen and their families. 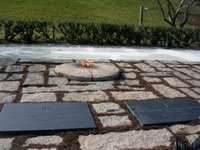 An eternal flame flickers over President John F Kennedy and his wife Jackie's grave (right). Other notable memorials and graves here include the Tomb of the Unknowns Civil War dead (the remains of 2,111 soldiers) where Third US Infantry sentinels maintain a 24 hour vigil, Iwo Jima, the Marine Corps Memorial, the Arlington House Memorial to Confederate General Robert E Lee, Boxer Joe Louis and the crew of the Challenger space shuttle.

We took the organised trip around the cemetary and this was another humbling experience. A whole week's tour was available if you really wanted to get depressed. 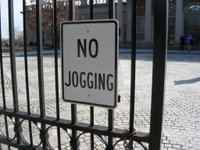 From there we decided to walk along the river towards The Pentagon. To see anyone walking was quite rare, people either seemed to be in cars, jogging (a sign prohibited it in Arlington Cemetary) or on bikes, a point made by the lack of pavements!

Across the river was the Jefferson Memorial, a white marble monument, with a 19 ft bronze statue of the countries 3rd president at it's centre.

We stayed on the North side of the river heading towards The Pentagon, built during World War II and the home to the United States Department of Defense. It is the highest capacity low-rise office building in the world and houses 26,000 military and civilian employees and not surprisingly has five sides, five floors and a five acre open space in the middle. The building is assigned six Washington DC zip codes, even though it is situated in the state of Virginia. The Army, Navy, Air Force, Marines, Joint Staff, and Secretary of Defense each has its own zip code.

On September 11, 2001 American Airlines Flight 77 crashed into the building, causing part of it to collapse and killed 125 people plus 64 on board the plane. Of course conspiracy theorists believe differently.

You couldn't get anywhere near the US Defense Building, we only found our way to the Metro Station after being advised by a Pentagon cop who beckoned us over after watching me take a photo. Suffice to say that I was made to delete the grainy shot.

We got of the train in Chinatown and found for the first time that day ourselves amongst people, not just dead ones! We then continued our walk past the MCI Center, home to both the NBA's Wizards and hockey's Capitals and onto Capitol Hill.

The Capitol building serves as home to Congress, the legislative branch of the United States federal government. The building, marked by its dome was completed in 1811 but was then part destroyed by the British in the War of 1812, only to be rebuilt in 1815. Behind the Capitol is the Supreme Court, the highest court in the US. 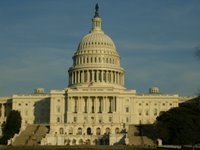 Like the White House, it was strange to be able to look at it in the flesh, it looked so familiar after seeing it so many times on television, but likewise the lawns (the building sits in 274 acres) and the streets surrounding one of the most famous icons in world politics were eerily quiet.

From here we walked up Constitution Avenue and onto Delaware Avenue (the many Avenue's named after states run at angles across the grid patterned street system) and came across the magnificent Union Station. Designed by famous Chicago architect Daniel Burnham, its 96 ft barrel vaulted ceilings welcome 20 million visitors a year. 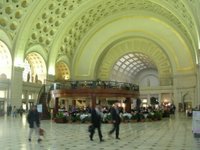 In keeping with American's general disinterest in their rail system, Union Station fell into a terrible state of disrepair and was closed in the late 70's. For 10 years it was ignored but finally in 1988 $70m was put towards a complete restoration and the station was re-opened in its present glorious form in 1988. The station has also starred in many films such as Hannibal and Minority Report.

What we didn't do because time was too short, was visit the Smithsonian Institution. I think it's 19 museum's and 7 research centre's need a weekend on their own.

On the Saturday we decided to visit the Holocaust Memorial Museum. Museum's normally celebrate the best that humanity can achieve, but this documented the worst. Opened in 1993, the museum is superbly laid out and tells the horrific story of 12 million Jews, Gypsies, homosexuals, Communists and the mentally ill losing their lives under the Nazi leadership. 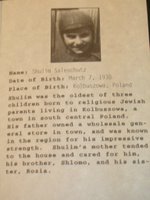 l and disturbing, upon entry you are given an ID card of an actual person who lived through the Holocaust. Mine showed a picture of Shulim Saleschutz, born March 7, 1930 in Poland. The little ID book told me how his father owned the general store in Kolbuszowa and when Shulim was 12, he was given an armband with the Star of David on it.

The book ended: "Shulim was deported to the Rzsezow ghetto on June 25, 1942, and then to the Belzec camp in July. There, Shulim was gassed with his mother, brother and sister. He was 12 years old."

The Holocaust Memorial Museum is not for the feint hearted but if you can face it, please go and visit.

Probably one of the quietest capital city's I have ever been too (don't expect it to be quiet in the summer though), more life can be found in some of DC's neighbourhoods. Arty Adams Morgan, the University area of Georgetown, the riverfronted and wonderfully named Foggy Bottom. Try their beer too. Then there is Dupont Circle, popular with the gay community and therefore complete with trendy little shops and bars, including the un-gay like Lucky Bar where we watched the Spurs v Charlton game and of course the weekend's main event.... The Superbowl.

If you are looking for a meal, we had a good one in Zola's (above the Spy Museum), complete with a rapping waiter! And Zaytinya's came well recommended too.

Overall an excellent weekend. An attractive city, easy to walk around with a lot of history in one small place, although the white marble buildings do all start to blend into one after a while. Avoid the summer and go if only to see the White House in the flesh, peer up at the magnificent Lincoln statue and visit the powerfully haunting Holocaust Musuem.