Tuesday, 2 May 2006
Honolulu At times fortunately it was easy to forget that Honolulu is in America, but then turn your back on the beach and watch traffic bumper to bumper surrounded by skyscrapers with Starbucks coffee shops dotted inside them and you're quickly reminded that despite being over 5 hours from the mainland you are still in the land of Uncle Sam. 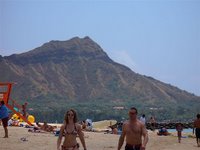 Completely formed by volcanoes and comprising 19 islands extending across a distance of 1,500 miles, Hawaii is the ultimate cultural melting pot. No more so than on Oahu, home to 900,000 of the total states 1,200,000 population.

I was told that there are actually less than 50,000 Hawaiian natives living in America's 50th state and in fact down in Waikiki it is so predominately Japanese that shop and road signs are written in Japanese and English is rarely heard. 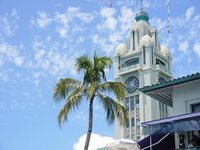 The city is comprised of two parts; the financial district which includes many historic buildings such as Aloha Tower and America's only royal palace, Iolani and the world famous if tiny Waikiki Beach. Not a place for a nice stroll as bodies cram any sand and then beyond the beach Honolulu's very own Rodeo Drive-esque shopping strip, with Japanese tourists pouring around them like bees around the preverbial honey pot.

I was disappointed in what I saw of Waikiki Beach. It was busy, the hotels were tired looking and there was a lot of construction. And don't come for the nightlife as Japanese shopp 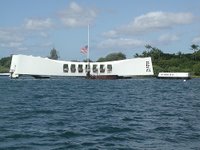 ers go to bed early as do honeymoon couples!

The general consensus was that this was a stopover to visit the beautiful extinct volcano of Diamond Head or the chilling Arizona Memorial marking America's entry into World War II at Pearl Harbor before heading of to one of the other islands such as Maui, Kauai, Lānai or the island of Hawaii itself, known as the 'Big Island.' More South Pacific than South of Chicago I believe.  ¶ 23:14