I have visited the tiny islands of Bermuda 6 times since I have been living in Chicago, the last time a couple of weeks ago.

The idyllic setting and it's offshore business jurisdiction with no direct taxes help make it popular with business people and cruise liners, and although the island struggles to compete for tourists because its so expensive once you are there compared to some of the Caribbean islands further south in the Atlantic, Canadians, Brits and Americans have been visiting the island since the early 20th century.

Of course don’t ever call Bermuda a Caribbean island because it is not. Situated in splendid North Atlantic isolation 600 miles east of the Carolina’s, it is the oldest colony of the United Kingdom in existence.

Marine geologists say that 100 million years ago the chain of little islands was part of the lip of a huge volcano, now long dormant. The part of Bermuda that is above the surface of the sea is surrounded by a wide platform of underwater coral reefs meaning a stunning inshore sea of stunning blues and greens and a haven for divers. But these reefs, a turbulent gulf stream and centuries of heavy ocean traffic has created decades of mythical stories of the Bermuda Triangle.

Discovered by Spanish explorer, Juan de Bermudez (hence the name), the storm-wracked conditions prevented any kind of permanent settlement until Sir George Somers' expedition to the English colony in North America known as Virginia came unstuck on the reefs near Bermuda in a huge storm, which left the survivors including Somers to settle on the island. In 1615 the island became the Somers Isles, which actually remains an official name for the country.

UK immigrants account for almost a third of the 65,000 population, and there is also a big Portuguese heritage, the result of immigration from Portuguese islands, especially the Azores and Madiera and there has also been sustained immigration from the West Indies and Canada more recently.

Bermuda's location and tax status means it is home to 12,500 foreign companies, many American and the 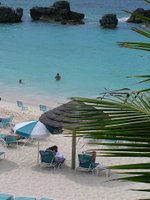 y directly employ 3,224 Bermudians and non-Bermudians (2000 figures). With tourism struggling, international business is growing and it is considered one of the biggest markets in the world for reinsurance (my reason for going there, not as some colleagues believe, the Dark 'n Stormy's!) Incredibly Bermuda has the highest GDP per capita in the world, $69,900, twice as big as the USA.

This goes a long way to explain the cost of living on the island. It is hideously expensive. A bag of groceries can easily cost $50, as almost everything is imported as the lands are mostly unsuitable for farming. The World Bank estimates that Bermuda is 380% more expensive than the USA and 220% more than the UK.

I have friends who pay $6-7,000 a month in rent to live in (admittedly beautiful) 2 bedroom apartments, monthly rent begins at $4,000 for the smallest place and a very nice family home near the water could cost as much as $20,000 a month. The price of everything from a beer, to a hotel room to a meal in a restaurant is enough to scare any tourist away.

all around you are beautiful lush gardens, pink sand and picturesque limestone pastel coloured houses (left). The weather is dictated by the gulf stream and therefore can be quite humid in the summer with regular showers, which is a good thing as Bermuda has no source of fresh water.

In my visits there I have got to know the 27 square miles pretty well. Most of the activity is based in the capital of Hamilton, including the business district, the Historical Society Museum, the City Hall and Arts Centre plus the main shopping area of Front Street, opposite to which normally sits a huge cruise liner or two (170 are due to dock this year). The historic St George's shows no signs of the impact business has had on Hamilton, whilst the once major British Royal Navy outpost at the other end of island is now home to the Bermuda Maritime Museum, Dolphin Quest, a shopping centre and the Frog and Onion Pub.

Flatts Village is one of my favourite areas on the island, with its own inlet and small bridge. Tuckers Town is stunning complete with its museum, private golf club and millionaires that are the only ones that can afford to play and live there. If you play golf, you will be in heaven as Bermuda has 9 course, the highest concentration per square mile anywhere in the world!

Activities on the island are nearly all outdoorsy, and normally involve the water. The national football team, coached by Bermudian Kyle Lightbourne, is ranked 160 (out of 196) in the world. Clyde Best and Shaun Goater are both legends on the island. One of the biggest couple of days in the calendar is Cup Match. Bermuda grinds to a complete halt for two days every summer (it was last week) when Somerset Cricket Club in the west end challenge the St. George's Cricket Club from the east end. Proving its British heritage of idiosyncrasy the popularity of the annual game was such that it caused continued absences from work. As a direct result a 2-day public holiday introduced back in 1947 and has been in effect ever since. Nice work if you can get it, and tax free!

There are a limited number of pubs on the island. The Pickled Onion is worth a visit as is the Robin Hood, particularly to watch the Addicks. They are both in Hamilton or one of the two Swizzle Inns on the island, which is credited for starting Bermuda’s national drink, th 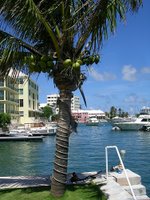 There are a lot of business type restaurants, with stuffy dress code policies, but my favourite place involves sitting on the beach with a pair of flip-flops on at Mickey's Bistro, which is part of the Mandarin Oriental operated - although owned by a member of the Saudi Arabian royal family - Elbow Beach Hotel.

As I approach another decade of my life, I am buoyed by not knowing what is around the corner. Christ, I thought I did as I approached my 30th birthday almost 10 years ago!

But as I have hinted on here before, despite my love for big cities, reservations of so called 'island fever' and those wacky shorts! I would at the right time of my life be tempted to Bermuda. My job would make the suggestion possible and I even understand that I wouldn't be the sole sad Addick sat in the pub Saturday mornings!

Click on the thumbnails to enlarge.
L to R: The Dockyard; Hamilton Princess Hotel; Only one car is allowed per household, so mopeds are the main mode of transport; A cruise liner docked in Hamilton; Gosling Rum Building; Royal Bermuda Yacht Club; Rich pickings; An extravagent office headquarters; Man in Bermuda shorts; A pink island bus. 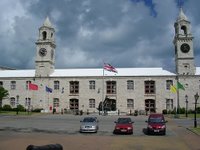 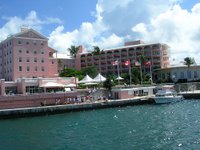 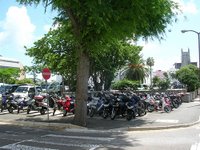 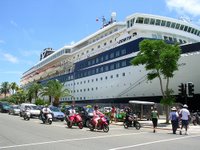 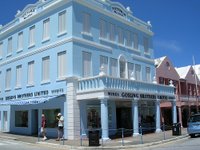 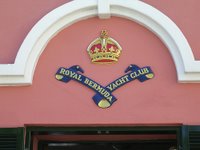 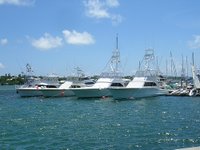 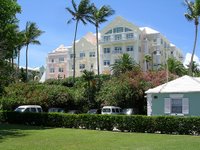 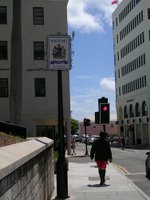 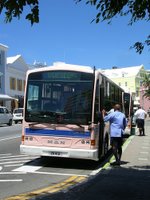