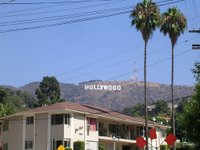 The Lonely Planet guide describes LA as overwhelming, intimidating and frightening. And it is all of those things, which not dissimiliar to the 'attitude' you find in New York is part of its, um, charm.

I hadn't been to LA for a long time but I remembered Bel Air, Rodeo Drive, immaculate ladies walking around with small dogs in handbags and the sense of danger and stardom. Well, not much had changed except some of the city looked tired and a bit '80's.

We arrived late on a Saturday night and were not allowed into our own hotel bar because we were either a) not trendy, b) too old, c) too late, d) not famous or e) all of the above. The Hotel Roosevelt on Hollywood Blvd was "the playground of luminaries including Clark Gable, Carole Lombard and Marilyn Monroe and the birthplace of the Academy Awards," but they have clearly spent all of their dough on the lobby and not staff training. The rooms needed updating and the service was worse than awful. And no shower gel, sorry had to mention that! 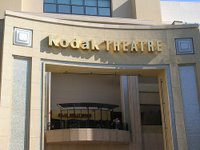 Hollywood itself has gone through a transformation, it is bit more Hollywood than Peckham these days, but the only places worth seeing are the Kodak (home to the Oscars) and Chinese Theater's. The Hollywood walk of fame is under your feet all around you but it the Grauman's Chinese Theater that gets all 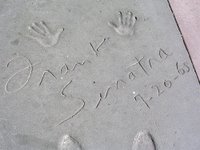 of the attention because of the foot & hand print's in the cement of people such as Frank Sinatra and Shirley Temple.

Not far away though was LA's most recognisable landmark, the 5oft tall Hollywood sign, put up as an advertising gimmick in 1923, it sits up on a hill and is best viewed from the leafy road of Beachwood Canyon Drive.

LA, which lives day to day dreading the rumble of an earthquake, is like many different cities under the banner of one, vast and amorphous. A car is a necessity and I remember talking to a work colleague from LA once who told me that his car is his own private space and he doesn't like it invaded. Well, he is from LA.

By car it is easy to navigate though. We managed to avoid buying a 'home of the stars map' being hawked on every corner by strange people, although it was tempting as you drive up and around the narrow roads of Bel Air and Beverly Hills. Sure, some of the houses were huge and incredible, but I couldn't help but think that the whole area needed a bit of a face-lift, by one of the cities many plastic surgeons perhaps?

Just south of here though was the vast metropolis of UCLA, home to 36,000 students and famed for it's research and sporting achievements. The university is based in the residential village of Westwood, which was fun place to sit on a sidewalk and grab some street food.

Not far from Westwood along Wilshire Blvd, is Rodeo Drive and it's designer shops. Tourists clutter the streets here and unless you are on the look out for that little Gucci dress (I wasn't), then it is probably best to avoid. Melrose Avenue is a much better shopping haven. A vista of cool boutiques, restaurants and cafe's, the blocks between La Cienega Blvd and N Highland Ave are well worth a stroll alongside the clutches of 'women that lunch.'

Many parts of West Hollywood are wholly residential and as we found out a stroll from one area of 'life' to another can take you a while, so it was back in the car to explore the neighbourhoods of La Brea and Fairfax district, with its daily farmers market.

Another old lady district of the city is Sunset Blvd. The Sunset strip between N Doheny Drive and N Laurel Avenue is a fusion of history, such as the Whisky A Go Go club, and up to the minute chic, with the uber-cool Mondrian Hotel, with it's famed celeb hangout the Sky Bar and the Grafton on Sunset. Johnny Depp's Viper Room is here also. 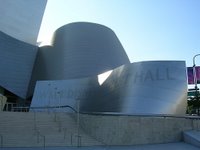 Downtown is little more than a huddle of high rises but does include the spectacular Disney Concert Hall, with it's curving and folding steel wings, a trademark of architect Frank Gehry. Many 'Angelenos' are said to be migrating there to live, following the development of many run-down buildings. .

When I was last in Los Angeles I stayed in Santa Monica and from what I remember I liked it, but from what we witnessed this time it was another place that needed a lick of paint. The Third Street pedestrianised promenade aside, it s 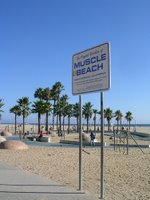 eemed to be the 'home' to homeless and people who were too weird to be called eccentric. The Pier is worth a look, the carousel dates back to 1920. And of course a photo of one doing his daily exercise on the parallel bars on Muscle Beach is a must!

Venice Beach is a short drive south of Santa Monica and the hippies and boho's look a lot more at home here, where Jim Morrison once lived. This eclectric place is best known for its Venetian looking canals and boardwalk.

Obviously LA is one of the largest entertainment centres on the planet. Almost every street corner has a cinema or theatre. Television and film production, despite competition from other American cities, reigns and is a draw to anyone with artistic talent. The consequence of this is the many musuems and galleries that celebrate the world of film.

Great places to eat and drink abound in LA. We managed to get a table for brunch at The Ivy (113 N Robertson Blvd), probably the only restaurant in America surrounded by a white picket fence. Fantastic for people watching and surprisingly not bank-breaking. Everyone looked famous, but I spend my whole life thinking that in major American cities, because unless they are Brad Pitt, I'm not going to recognise them!

I was told that if you really wanted to spot someone famous then it was best to score front row seats at the LA Lakers. Jack Nicholson is a regular and they play at the Staples Center downtown, as do c-celeb rivals LA Clippers and hockey team Los Angeles Kings.

Food-wise we had a great meal at Koi (730 N Cienega Blvd), the service provided by right stunner was excellent, which I did not always find to be the case in LA. And we did manage to blag our way into the Sky Bar (8440 Sunset Blvd), which had amazing night-time views over the city. Breakfast at Mels Drive In (1650 N Highland Ave), which starred in the film American Graffiti, is also recommended.

Los Angeles only became a city of any size and importance during WW1 when the Lockheed brothers and Donald Douglas bought the aircraft industry to the area but it is the movie business that symbolised 20th century LA. But it hasn't been all movie action with the city suffering huge racism problems with riots in 1979 and more recently in 1992 when 54 people were killed after the Rodney King beatings. 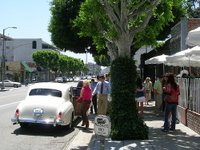 LA is detested by most due to its reliance on a car, it's dangerous crime-filled areas, particularly the notorious South Central 'hoods' of Compton and Watts and it's so called plastic personalties but I liked it, as I did the last time I visited.

There is lots to do and see and a weekend was never going to be enough. LA's shopping, bar and restaurant scene takes a lot of beating and as for the people, they are all mad as a box of frogs of course and sometimes you do feel like you are part of a film-set. Shy and retiring it is not, lights, camera, action it is.

Posts on the Pacific Coastal Highway and San Francisco will follow shortly.  ¶ 10:32