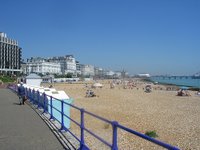 Eastbourne has become my home from home whenever I am back in the UK. My parents moved there almost 3 years ago after spending their whole lives in South East London. It was a brave move to up sticks and head into the unknown albeit no one plans more carefully than them. They have a great place, which very much feels like home when I'm there. Despite my Dad liking the occasional flutter they will agree they have never been one of life’s greatest gamblers but it makes me proud that they took one moving away from all they knew to a place that is very different in so many good ways, even though sometimes I get the impression they are the youngest swingers in the town, known for its retirement seekers.

Eastbourne sells itself as the 'sunshine coast' but with a larger than average age group, it is also considered to be the retirement coast, although the area has seen lots of new build houses in rece 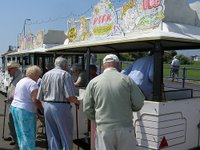 nt years in an effort to appeal to younger families.

Eastbourne is said to have been a major Roman settlement but it was the London, Brighton and South-Coast Railway that arrived in 1849 which saw the town grow in size of both population and grandeur, as the Duke of Devonshire oversaw the construction of some impressive buildings at that time. WWII was not kind to the town. Outside of London it was Southern England’s most bombed place. A large number of Victorian buildings were either damaged or destroyed, often by our own pilots, who unloaded unwanted munitions overhead. 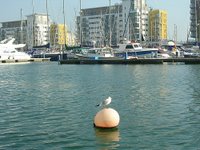 The 1980’s saw the local governments agree to the construction of one or two hideous structures, none other than the TGWU headquarters on the sea-front. Sovereign Harbour was completed rather controversially at the time in 1993, containing expensive housing, restaurants and Europe’s largest marina.

Nearly all of the coastal fronted land is still owned by the Duke of Devonshire, which explains why no garish shops or bars have ever taken the place of the literally hundreds of Victorian hotels, including the Grand (below) that stand side by side facing the sea. 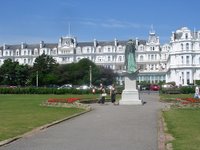 Unlike many of its fellow south-coastal seaside towns, investment has been made and it has a wonderfully well kept picturesque seafront sandwiched between Beachy Head and Sovereign Harbour and adorned with flower beds and coffee shops.

Eastbourne Pier protrudes out from the deep cobbled beaches with several Martello Towers situated along the front along with its famous bandstand, still actively used. Rarely do you see many people on the beach, although my son loves it as he makes a beeline for the sea as if it was magnetized, but the promenade that runs the length of the beach is always awash with people walking and slowly at that as the old dears ponder what they are going to have for tea in one of the many tiny hotel restaurants.

It is a place to mooch, listening to the sea and breathing in the fresh air. In the summer many Londoners do just that seeking a day in the warm and clean air, just 100 minutes away from London Bridge.

The town is awash with many open public places, with Princes Park worth a stroll with its large lake and swans. The annual Air Show and the important women’s pre-Wimbledon tennis tournament, played in Devonshire Park, both attract many visitors. 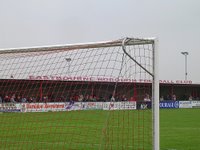 The areas between my parents home - about 4 miles from the sea - contains some much missed country pubs hidden amongst pretty villages such as Wannock, Jevington and East Dean (home to ex-Addick John Robinson) and wherever you look the beautiful South Downs are never far from sight. To me though it is the sea that is Eastbourne’s main attraction, growing up in inner London I dreamt of living by the sea and although I'm now just a 15-minute walk to the huge expanse of water that is Lake Michigan, my Mum & Dad’s place allows me and my son to spend many a precious hour watching and listening to the tide crash in and out. 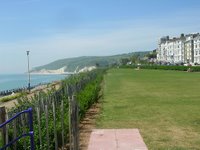 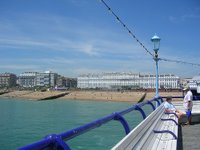 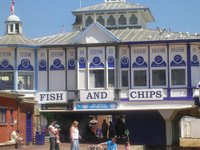