Wednesday, 25 October 2006
San Francisco It seems like a long time ago I was there but here are my thoughts on the Streets of San Francisco.
“San Francisco is a mad city – inhabited for the most part by perfectly insane 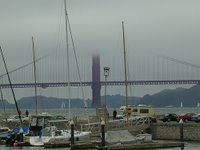 The Spanish, the Gold Rush, earthquakes, the summer of love, the gay capital, Levis, the dot.com boom, and the dot.com crash. All these things are unmistakably part of the colourful timeline of the city of San Francisco.

I had been to San Francisco before and until I moved to Chicago and became completely biased, it held the title as my favourite American city. It is a compact place and asks to be walked, this despite its huge sloping streets screaming down at you from each turn of a corner.

It is a city, much like Chicago, of neighbourhoods with the Bay on one side and the Pacific Ocean on the other and the marvellous Golden Gate Bridge dissecting the two and taking cars, cyclists and people to and from the city to Marin County

The expression laid back is rather trite, this city is almost horizontal. It is cool, but without the edginess of Los Angeles and it can get foggy. Don’t be surprised to come here and not be able to see the Golden Gate Bridge, all 4,200 ft span of it, for the whole time you are here.

You will be amazed at how many people are wearing ‘San Francisco’ hoodies or sweatshirts when you head out for your morning stroll. Don’t be amazed because you too will end up buying one once the fog and cold sets in during the day. 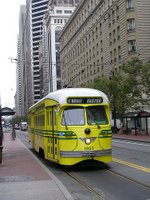 Another icon of the city is the cable car. The first one appeared in 1873 and was invented by Englishman Andrew Hallidie. Despite its early popularity for most of the 20th century the system was in a state of disrepair until locals saved it from politicans and accountants. The rebuilt system was re-opened in 1984 and now serves just 3 lines, with 40 cars. It’s not cheap ($5 each way) and the locals tend to ignore them and get the more frequent and cheaper buses, but of course they are packed with tourists like me watching the driver maneuver the cars along miles of underground cable.

The cable cars are busy and only seat 30 people, so it is rather strange in the age of seat belts and airbags to see people literally hanging on for dear life as they make there way up an 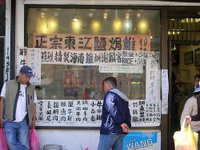 d down San Fran’s steep streets, like the route from Market St to Powell Street.
A stroll around Chinatown is a must. Along Stockton Street and Grant Avenue pretty much everything goes. Birds chirp in cages hanging from ceilings, turtles are piled up high in boxes on the street, fruit of all imaginations is hawked, and huge freshly caught fish flap around on blocks of ice awaiting their fate and steam billows out of noodle shop after noodle shop. I have never been to Beijing but this must be a close imitation.

In North Beach the quivering fish are replaced by laid back Italian coffee shops and family owned pasta restaurants. This 'Little Italy' ‘hood next to Washington Park and overshadowed by the huge Saints Peter and Paul church comes alive after dark, try Moose’s (1652 Stockton St) for some laid back jazz.

A short stroll from here is the Coit Tower, which can be seen from most viewpoints, so no need to get close unless you want to go inside. The building is named after an old eccentric called Lillie Hitchcock Coit, who financed the spout-like structure in 1934. 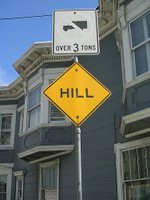 of the cities most expensive real estate, oh by the way there is not a cheap real estate part of town. My favourite bit of the city is here on the 1,000th block of Lombard Street between Hyde and Leavenworth. The street sharply zig-zags down a steep hill and is said to be the ‘crookedest street in the world.’ It has to be seen to be believed.

The ponderous San Francisco Art Institute is also worth exploring. Higher still over the city and you will find Nob Hill. Stand here and survey everything around you. The panorama is magnificent and if you want to rest your weary feet after the climbing up and down the vertical pavements, pop into the Top of the Mark bar situated on the top floor of the Mark Hopkins Inter-Continental Hotel (999 California Street).

From here jump back on the cable car and head to Fisherman’s Wharf. The locals turn their noses up at the tourist trap that is Fisherman’s Wharf and personally the area around Pier 39 is naff but the sea-lions basking in the sun is worth the journey. 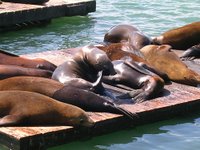 It is also here that you book your tickets for an excursion to Alcatraz. Only in America of course could they make a prison, which from 1933 to 1963 held some of the countries most infamous criminals including Chicago’s Al Capone, into a tourist attraction but for the 2nd time I was unable to ‘escape to Alcatraz’ as all the tours whilst we were their were sold out. Take heed if you plan to visit in the summer.

If you have the legs you can walk from here to The Marina and the old Spanish fort, Fort Mason. The Marina was one of the worst hit areas during the 1989 earthquake and is mainly residential although around Fillmore and Chestnut Streets you find quite a bar and restaurant scene. Fort Mason has a military history through the Civil War and WWII and isn’t much more than a collection of institutional buildings. Further along is the huge expanse of open land called The Presidio. This vast area also has its past steeped in military history and contains the San Francisco National Military Cemetery and millions of rollerbladers, joggers and dog walkers.

We entered San Francisco via the Golden Gate Bridge and it we drove its 2 miles under beautiful blue skies, which was lucky because the afternoon we went down to see it in its full glory it was covered in fog.

The Golden Gate Bridge is one of America’s greatest symbols. It was built by a fellow called Joseph B Strauss and was opened in May 1937 after 4 years of construction. The suspension bridge was named the Golden Gate because of it’s striking colour but is actually painted 'international orange' and a 1,000 gallons of fresh paint is put on it every week by a full-time team of 25 painters.

The neighbourhoods of Upper and Lower Haight are today home to the professional classes but back in the 60’s it was the ground zero of the Summer of Love. The main drag of Haight Street (below) is a confusing collection of bohemian shops selling vintage t-shirts and hippie jewellery and trendy boutiques, but all around here the city pays tribute to the hippie era. An apartment where Janis Joplin lived 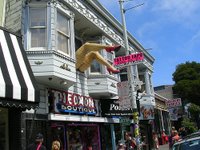 , the house owned by The Grateful Dead and the mansion painted entirely black by members of Jefferson Airplane. Band member Grace Slick famously said “If you remember the 60’s you weren’t there.” Well he could pop back and jog his memory.

Surrounding Haight Street many of those 60’s wild child’s have done very well for themselves as gorgeous houses reside in an area surrounded by huge open spaces – The Golden Gate Park, Buena Vista Park, Corona Heights Park and a narrow strip of open space called The Panhandle.

Castro is south of here and the epicenter of the cities gay community. It is said that more than 10% of San Francisco’s populate is gay or lesbian and many originally settled in The Castro area and have made a lot of money in renovating old the run-down Victorian houses that sit proudly on the quiet streets.

Other area we explored was the slightly less attractive neighbourhood of SOMA (south of Market St). Long windswept streets host the cities arty district. The club scene happens here as does the re-gentrification of old lofts and warehouses. The San Francisco Museum of Modern Art (SFMOMA) and Sony’s Metreon are unusual bed-fellows in the only open space south of Market Street, The Yerba Buena Gardens. Walk directly down 3rd Street towards the Pacific Ocean and you will find AT&T Park, home of baseball’s San Francisco Giants. Opened in 2000, it lies next to the ocean, where on game-days a Labrador sits in a dingy waiting to fetch any home runs hit out of the stadium. I don’t make these things up you know!

The main hub of SF is Union Square, the cities communal front garden. This where most of the theatres are, the big department stores hang out and art galleries.

Hotels take their places along Powell, Post, Mason and Geary Street, including where we stayed. From here everywhere seems walkable, although beware of the nigh on perpendicular roads hiding behind every other corner.

Restaurants are not of the famed quality that can be found in LA but a good meal is never far way, although not necessarily cheap and better options maybe found in the surrounding neighbourhoods. As you might imagine there is a big Asian influence and there are a lot of vegetarian restaurants too, our favourite being Greens, which is in Fort Mason.

Bars and pubs are plentiful. The Tosca Café (242 Columbus Ave) is real 40’s America, try a famed Irish coffee and The Redwood Room in the Clift Hotel (496 Geary St) is a late-night people watching place. Martini’s were invented here, the best ones we were told can be shaken and stirred at Martuni’s (4 Valencia St). If a cup of Darjeeling is more your thing, then pop into the Imp 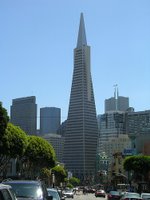 Downtown San Francisco is compact and belies it power as the financial centre of the American west coast. Like most financial district’s it is quiet at the weekend but it allowed us to get up close to one of the icons of the city, the Transamerica Pyramid, San Fran’s tallest building at 853 ft. The diverse architecture of these streets includes the Bank of America building (555 California St) and the Embarcadero Center, an office and retail complex.

A stark contrast to its rival LA, San Francisco is homely (if you can afford it), affable and easy to get around. There are many must-see attractions, some of which can be busy but what I like about this place is its pace. You can meander the streets without a map and get a real feel for the place and its people, who don’t seem to have a care in the world. 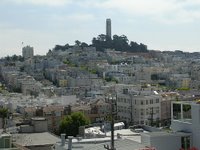 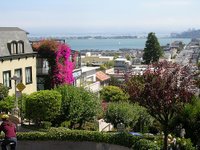 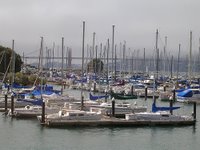 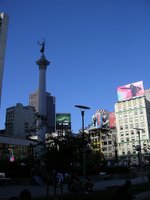 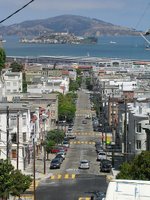 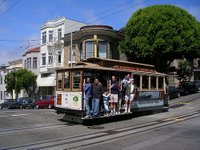