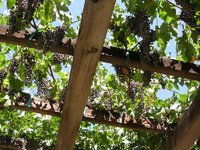 This does feel like a long time ago, in fact come to think of it, it was. Nevertheless I get regular emails from wineries that I allegedly signed upto and a box full of wine about once a month from one of the two places where we were impressed or imbibed enough to become members. The first sip from a glass of Californian Pinot Noir brings back great memories and both those and wine are for sharing, so here you go....

Following our excursion up the picturesque Highway 1 from Los Angeles, we swerved around San Francisco and drove inland to Sonoma Valley, where we spent a night in the splendid El Dorado Hotel. American's didn't realise that they had some of the world's finest wine growing land on their doorstep until the mid 1880's when the Hungarian Agoston Haraszthy bought grapevines from Europe to plant in the curving and cumpled terrains sat on the heterogeneous assembly of rock-types.

The historic plaza in Sonoma is still the centre of most of the activity in the area. The City Hall sits in the middle of the plaza, with the Bear Flag Monument, erected to celebrate a short lived republic.

Enough of that, you didn't come here to learn about bears, you want to know about the grape. Time was short so we didn't venture too far from the town and spent the afternoon in the Carneros region at the foot of the Valley. 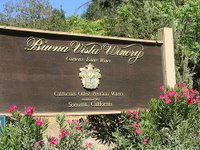 Buena Vista (right) is the oldest and one of the most beautiful wineries in the region, established in 1857 by our Hungarian friend. It's a bit touristy though, with busloads of people coming through the tasting room and we didn't get too excited about the wine on offer, although it was slightly more palatable than Viansa, which is the first winery you come too driving into Carneros from San Francisco. Viansa did have a very welcoming Italian market though, which held our attention for a while as we were starving.

The champagne caves of the 385-acre Gloria Ferrer with it's magnificent vista terraced tasting room was a much more worthy stop as was Sebastiani, founded by monks.

Our favourite vineyard stop in Sonoma was Gundlach-Bundschu. Founded by Bavarian immigrants and the 5th and 6th generation of the Bundschu family still manage the estate. Rieslings and Gewurztraminers are the favoured squeeze and it's slightly off the beaten track, but we were welcomed by a very nice lady, who knew her stuff and after a few glasses, we walked out as their latest members.

A stroll and a coffee was needed after our tastings and the charming and relaxing town square and the Sonoma State Historical Park was perfect for that. Circling the square a Mexican mission, an old army barracks, which is now a museum plus hotels, wine shops and cafes all lean peacefully next to each other. We chose the restaurant in our hotel for dinner, and it was an excellent choice.

Over dinner and a great bottle of Robert Stemmler Pinot Noir, I was told that we had an early start the next morning.... a very early start. As a birthday treat we were going to take a hot-air balloon over the vineyards of Napa, something that I'd always wanted to do, and a rather more tranquil prelude to my sky dive a few weeks later. 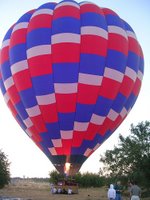 We huddled outside a non-descript office in Napa at 4.30am, with no sign of the sun and drove out for about 45 minutes to the spot where we were going to take the hot-air balloon. After standing around in the cold air watching as the huge balloon was filled with hot-air, we jumped in and very gently started to climb up into the sky. The views were breathtaking as we watched the sun rise over the miles and miles of farmyards, creeks and vineyards, with the Mayacmas Mountains underlying them to the south from 3,500 feet.

After an hour and a half of tranquil flying, which gives you no sensation of motion or perception of height, despite just a 'basket' for company we were driven back to Napa, which is a very uninteresting, almost ugly kind of place, the complete opposite of Sonoma, although the area down by the riverfront has a huge collection of restaurants and cafes. We warmed ourselves up with a coffee at Alexi's (1517 Third St) and marvelled at our early morning experience.

By 10am there was only one thing to do and that was to taste some wine, so we drove north along the Silverado Trail and made our first stop to coincide with opening time at the Stags Leap wine cellars, which produces renowned Cabernet Sauvignons. From here it was a short hop onto the less renowned Silverado Vineyards.

Driving blind drunk to most Americans is second nature, but I was not too keen especially as we were driving onto San Francisco that evening 50 miles away. I lost the toss and had to stick with H2o for the rest of the day but if you were staying overnight there are plenty of organised bus tours and the Napa Valley Wine Train so as to avoid the local traffic police, thats if you can find one. 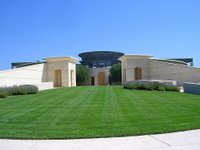 Next stop was the opulent Opus One (left) founded by Baron Philippe de Rothschild, a wine king no doubt and local dude Robert Mondavi. The tour is free but a tasting costs $25 per person and is a bit steep when you consider others cost as little as 5 bucks. We gave the tasting a swerve, had a quick gander in Mondavi's place up the street, which I'll add was very beautiful, and then drove onto a winery I was very much looking forward to seeing. 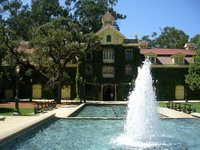 The Rubican Estate (right) is where the Godfather writer and producer Francis Ford Coppola has been making wines for 27 years. After being greeted by the valet and given our very own 'tasting passport' we entered the elegant chateau (close your eyes and you could have been in Bordeaux). Inside vaulted stone cellars and a spectacular hand-carved staircase and a couple of tasting rooms were alive with people. We settled at a counter and were treated to a wonderful tasting experience made possible by a superb sommelier and unrivaled wines. Yep, we joined their wine club too.

By this time we 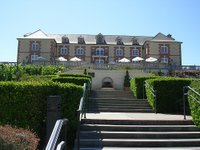 needed food because crackers weren't doing it and we stopped at the Dean & Deluca cafe in St Helena for a snack.

We turned the car around and made our way back down Hwy 29 and onto San Francisco to finish our holiday but not before stopping at Domaine Chardon (left), Moet & Chandon's American sparkling wine house.

Wine buffs or not will enjoy this jaunt around the countryside, parts of Napa like Yountville and Rutherford are very pretty. There are hundreds of wineries, some separated by just a few hundred yards. If the whole stuffy vineyard thing puts you off, there are many decent wine shops, particularly in Sonoma, where locally grown wine can be purchased. It may be cheaper however to buy it at the vineyards own shops. The recent changes to hand luggage on planes is a pain if you leave with armfuls of bottles but all of the wineries we visited shipped and nearly all of the ones I have researched have online shopping. So sample, make notes, go home and get online.

Note the opening hours. They generally only open between 10am and 5pm, some close earlier and avoid summer weekends and bank holidays as the crowds will annoy the hell out of you. And if you get a chance try the hot-air balloon, it was cool. 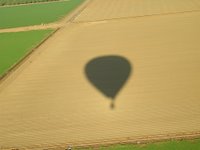 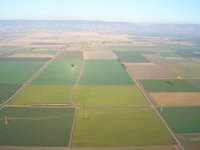 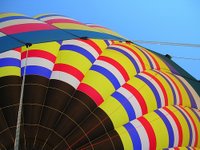