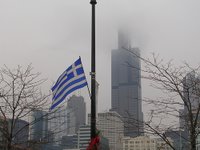 West and south of the Loop situated around the marauding University of Illinois at Chicago are two small areas of the city called Greektown and Little Italy. To describe these as neighbourhood’s is perhaps biggin’ up their part a little, but nonetheless both areas have a historical and cultural significance to the city.

Greektown covers about 5 blocks south of Randolph Street, where Greek restaurants dominate the sidewalks and the shop signs are displayed in both the Greek and English language. The area still does have a large Greek-American population, most of whose ancestors came in the mid 1800’s, although the numbers have diminished due to the rise in property prices and the expansion of the university. 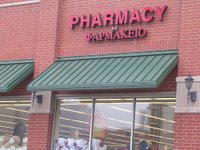 erican’s ‘found’ it’s cuisine in the 1960’s and subsequently the Greeks started to celebrate their heritage more actively. The area hit the big screen when it was eulogized in the film 'My Big Fat Wedding.'

The ugly university buildings of UIC were part of the 'why an earth' 1960’s architectural boom and is home to about 5,000 students. UIC as a whole is in fact the largest university in the Chicago area.

Just around the corner is somewhere not very Greek at all but worth a visit. Old St Patricks Cathedral (700 W Adams St) is Chicago’s oldest public building after surviving the Great Fire of 1871 and is also, honestly, home to the largest street party in the world held every July.

The restaurants are all reasonably priced and their menus are similar with plenty of lamb dishes on offer, including Gyros (better known in Catford as Donor’s), which of course should never to be consumed without anything less than 8 pints inside you.

For reasons I have never known, lamb doesn’t appear often on menus in Chicago, but it is plentiful along this strip of restaurants, which to be honest are all pretty much of a similar quality. My favourite being The Parthenon (314 S Halsted St), only because my boss always takes me there and insists that everything should be washed down with a glass of rodity, which is said to be made in the basement. It tastes like it does too.

For a snack or just a cup of coffee, I would also recommend Artopolis (306 S Halsted St). The Greek salad's were great and the Greek coffee had to be shaken out of the cup it was so strong.

Further south past The Jane Addams Hull-House Museum and then west on Taylor Street, basically walking around UIC, is a strip of about half a mile long that is known as Little Italy. Now if you are expecting a Little Italy neighbourhood like the ones in New York, Cleveland or Toronto, then you will be disappointed. This is a stroll of a mile and a half and actually not very Italian, although it does host some of the best Italian restaurants in the city. 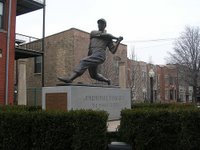 ed on the near west side of Chicago in the late 19th century, working nearby in the Randolph Street food markets and quickly making it home building churches such as the Our Lady of Pompeii (1224 W Lexington Street). Although the Italians were never a majority in the area, they have kept a presence to this day inspiring the brand new building of the National Italian American Sports Hall of Fame at 1431 W Taylor St. A plaza dedicated to baseball legend Joe DiMaggio is opposite.

To find more Italian recognition stroll through Arrigio Park to see a statue of Christopher Columbus, discoverer of the Americas. Around the park are some nice residential streets. Walk along Loomis Street to see classic Chicago three-flats and along Lexington Street to enjoy beautiful homes that adjoin the park. 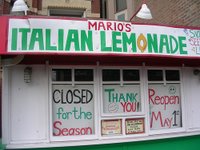 One of my favourite city restaurants is here, Tuscany (1014 W Taylor) but if you prefer cooking your own then you will be in Italian heaven in Conte Di Savoia. Closed in the winter for obvious reason’s Mario’s Italian Lemonade place (1068 W Taylor) is swarming with locals looking for gelato and Lupini beans in the summer.

Don't expect Athens or Rome but close your eyes and imagine these streets swarming with Greeks and Italian families in the late 1880's and see the lagacy that was left behind.  ¶ 14:01