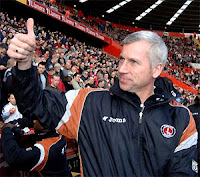 The timely final part of a series. Click for parts one, two, three and four.

December 2006 - current Alan Pardew
After Alan Pardew was sacked by West Ham, with us heading to oblivion under Uncle Les, many of us touted Pards as a potential saviour. The board conscious of already being the laughing stock of football acted swiftly again to hire the best youngest managerial talent available on Christmas Eve and fans hoped that we would wake from a nightmare time that few had witnessed before.

It is clear to me that under Curbishley he took us the door of oblivion and left the key for Dowie. Unfortunately Dowie opened that door and Reed sat us in a formula 1 car and drove us headlong down it.

Then this man came along. We were down at Christmas in my mind and that has nothing to do with points or position. The players had no heart for the battle, the board, so often spot-on with their decision making, resembled a hastily thrown together east African government, the supporters had had their heart ripped out of them, there was no money, the media was ripping into us and the club simply had 'that look,' we had seen in others so many times before.

I was never the biggest Pardew fan when he played for us. He played for Palace see, and I would rather us not buy players from that crock of shit. I would watch him make late runs into the box and get crucial goals in a red shirt back in the early 90's and I would cheer but then I would imagine him wearing those tight Palace shorts and be disappointed that we had stooped so low as to acquire players from those tosspots.

Nonetheless the stats say that he played more games and scored many more goals (24 for us, 8 for Palarse) and I pay a lot of attention to stats but it was his bright mind and his intelligent demeanour that I liked when he was a young manager at Reading and although he did the dirty, he showed ambition and a stomach for a challenge by going to West Ham. Hammers fans didn’t take to him at first but he persevered and he rebuilt that team and last season he did them proud. I wrote after last season’s FA Cup Final:

"Afterwards I couldn't help feel that Charlton would never have been so adventurous in their play and a UEFA Cup place is fully deserved by an obviously intelligent manager in Alan Pardew." (more)

I was pleased when we appointed Pardew and I have been more and more impressed with him after each day, each game and each interview. The man is a class act. He oozes wonderful man management skills, look what his persona has done to Marcus Bent, Amdy Faye and others. He truly understands the relationship between fan and player and manager and he’s convinced me enough during the recent 6 weeks that he is a Charlton man too.

Pards may have picked up a club in the tunnel of oblivion and none of us are under any illusions that relegation is calling but he has turned us around and fighting to get us back down that tunnel, the one that have no doubt the now West Ham manager led us to.

Pardew may not keep us up but I personally am privileged to see this young man at our club. He has made us proud to be Addicks again, he has given us hope and pulled all the factions together and anyone with Charton in blood truly knows the value of being one.  ¶ 10:30