Roscoe Village is on the North Side of Chicago about 15 minutes by train from the Loop and whilst not an official place residents roughly call the boundaries of Addison Street, Belmont Avenue, Western Avenue, and Ravenswood Avenue to be the periphery of the village with the busy Roscoe Street bisecting it.

People have lived in this part of town since the18th Century, when the area was inhabited by the Fox Indians. The Germans came next during the 1st world war and today the area is home to over 6200 residents.

It is a quiet family orientated neighbourhood with a lot of older properties converted into detached family homes, but scores of 1920's two and three flats plus its good share of bars and restaur 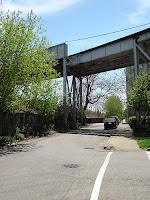 The leafy trees that flank the village's main artery, Roscoe Street, provide an umbrella of shade for the many pedestrians meandering past quaint boutiques and funky restaurants. The community vibe gets turned up a notch by the Parisian-style columns along the road, where neighbours post notices about everything from local bands to lost cats.

Many of the shops are independently owned and include Suckers Candy, Roscoe Village Bikes, Hard Boiled Records, and the A440 Violin Shop. Roscoe Village is best known for being home to the largest concentration of antique stores in the Midwest, called Antique Row, on a five-block stretch located on Belmont Avenue. And the Chicago Cubs home at Wrigley is only a mile east, so pick the wrong day and you could hit a lot of traffic, both the car and the people kind. 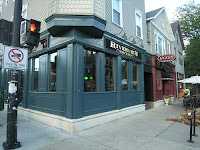 Roscoe. For wine stop into Lush, a bar surrounded by a wine shop and for a pint pop into the Riverview Tavern (right), named after the once Riverview Amusement Park, a Chicago landmark opened in 1904 but closed in 1967. One of its seven roller coasters was called The Bobs, which at 65 mph was one of the fastest rides in the world at the time.

There is an eclectic mix of restaurant options, such as El Tinajon, which is a Guatemalan place, Turquoise Cafe, which sells mid-priced Turkish food and the unfortunately named Kaze, which is a sushi restaurant.

A big annual event held every August is Retro on Roscoe, billed as Chicago's most popular neighborhood festival with last year over 50,000 people attending. Live music and comedy with a huge dash of retro make it a fun place to be.
Click on photos to enlarge. 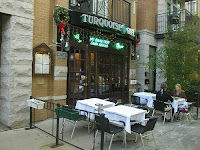 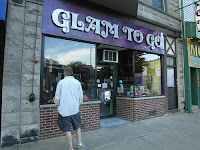