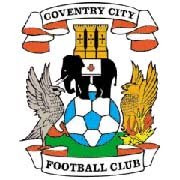 Coventry City 2-2 Charlton, 24th February, 2001
It is said that being sent to Coventry came about during the English civil war when Royalists were banished to Coventry for their own good. It is not known whether one of them had a rather long chin and went by the name of Hill but Wyn Grant gives a bit more insight into the blight of English landscape that is Coventry here.

I was asked as opposed to sent to Coventry in the winter of 2001 when I got invited to spend the afternoon with some clients in their executive boxes at Highfield Road, when I say executive box I am hugely embellishing this story as the boxes were piled up on top of each other as if concrete shoe boxes in the corner nuzzled in between two stands. I watched the game from what appeared a balcony but there was a steady supply of beer and curled up sandwiches. I was looked at rather oddly by the cross section of life insurance salemen, farmers and auto factory chiefs as I welcomed the players onto the pitch for their warm-up and joined the other few Addicks in the ground an hour from kick-off with a rousing "Chrissy Powell, Chrissy Powell, Chrissy Powell" as he had just that week been selected by Sven-Göran Eriksson in his first ever England squad.

I remember his huge grin as if he couldn't quite believe it himself, later that summer we were to spend a week in his company in Sardinia after bumping into him on our first night. He and his wife are truly the nicest people you could ever meet and I remember the game being punctuated by chants from a healthy number of Addicks of "England's number 3."

Anyway we were having a fine season and were 7 games unbeaten after the 5-0 Boxing Day drubbing at Upton Park. City meanwhile were struggling and would eventually get relegated even with Jay Bothroyd amongst their number!

Highfield Road was made the countries first all-seated stadium in 1981 (they have Jimmy the chin to thank for that) and Cov were a top flight institution without anyone noticing. This was to be their 34th and final season in the top tier and they haven't been anywhere near since, though to be fair their crowds, now at the Ricoh Arena, haven't really changed much since. There were 19,000 at the game that day.

The Charlton contingent were in fine voice but were silenced after 8 minutes by a young Craig Bellamy who tapped in after Ilic dropped a cross. Not long after however we were level when Rufus scrambled home after JJ's shot hit the bar. I went up and got some funny looks. Oh well. We shaded the first half and I retired to another warm can of beer. Start of the 2nd, the farmers were still talking manure as JJ skipped away down the other end to finish coolly. I think it was a Kish pass too, bloody hell.

At this point we were well on top and should have wrapped up the win but John Hartson had other plans and equalised, with again Ilic at fault. All around me ugly descendents of Royalists celebrated as the locals finally found their voices. The game ended 2-2 and although it was a good point, we really should have had all three.