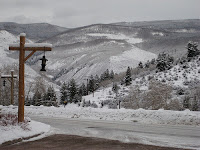 Not exactly roughing it. That is Beaver Creek's proud tagline and roughing it, it is not. Man-made by people who have too much money but know a good thing when they see it, the Beaver Creek ski resort was opened in 1980 as an extension of Vail and the idea was to blend Swiss charm with American hospitality and 27-years on both of those ideals very much exist.

One thing that didn't exist before we got there was snow, but 2 foot of it fell between last Thursday and Friday which cheered the locals no-end. I had not been skiing for a long time and enrolled in the beginners class. As my Aussie instructor told me.... if he could give me a lobotomy, then he could make me into a pro-skiier within a week as it is my subconsciousness he is training not the rest of me. A few simple skills is all that is needed and of course no fear whatsoever. A slight problem for someone as uncordinated and poofy as me.

And what can I tell you after a few days of lessons? Well I do still have the same brain and I still ski like Bambi but it was fun, although my calf's were bloody killing. Those boots are not made for comfort.

Of course the most frustrating thing about skiing is that everyone else always looks brilliant. Kids not old enough to speak fly by you at break-neck speeds with goggles covering their whole faces with n 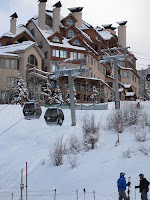 ot a care in the world. Just wait until I catch one of those blighters.... and you never can.

Four mountains make up the resort - Beaver Creek, Grouse Peak, Bachelor Gulch, Arrowhead and are all connected, although a lot of the runs and lifts were still not open because the season is yet to start in earnest. This suited us though because the place was quiet, cheaper and unbeknown to us, you get the full benefit of the experienced professional ski instructors before the season takes off. In a week or so all the best instructors disappear to teach people with more money than balance, leaving the rookies manning the minions.

We were lucky and met some great instructors and people both avant and apres ski. The resort was extremely cosmopolitan, the variety of foreign accents actually making us strangely homesick.

The resort consists of three villages - Beaver Creek, Arrowhead and where we stayed at Bachelor Gulch. A excellent bus service runs constantly between the three and other outposts, allowing time to rest weary legs and gaze at picture post card views and eliminate the need for a car. 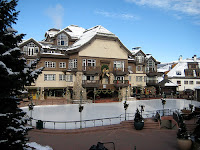 Beaver Creek village is the main draw with it's ice-rink, theatre, restaurants and boutiques. Very neat, very tidy, very er, Swiss. At the base of the mountain the ski school dominates and gondola's and ski lifts combine to take you 11,440ft to the summit. This is not a late night place to go wild, Vail will satisfy those needs but blimey I had trouble staying up until 9pm. Did I mention my poor legs....

Bachelor Gulch itself is dominated by the Ritz Carlton, crowning the top of a mountain like a Bavarian castle. Flickering log fires take centre stage in most of the huge communial rooms with only the freshly fallen snow outside enticing you to leave it's sanctuary. The new Wolfgang Puck restaurant opened a week before we were there and old Wolfy came and joined us when we ate there on Saturday night 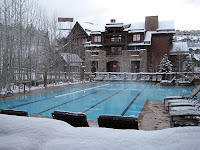 , charming us alongside his Argentinian business partner.

We were prepared for a walking holiday as it was early in the season, so it was wonderful to see so much snow and be able to (attempt) to ski. I'd imagine that this place gets really busy between the middle of December to February, 800 instructors alone are employed by the ski school over the New Year period. I would definitely go again, skiing in Colorado is very different to skiing European resorts. Less snobbiness, less money but certainly not roughing it.  ¶ 21:36