The Gold Coast is Chicago's wealthiest neighbourhood and is predominately a residential area extending along the lakefront from Oak Street to North Avenue, reaching inland approximately to Dearborn Parkway. The housing is a mixture of 19th century brownstones and concrete high-rises, mostly from around the 1960s. At North Avenue the streets of the Gold Coast overlook the southern tip of Lincoln Park.

From what I've read the Gold Coast was an unexceptional neighborhood despite it's location until 1885 when a wealthy businessman called Potter Palmer built his wife a castle on Lake Shore Drive. Palmer also built the famous Palmer House hotel in Chicago, bought by Conrad Hilton in 1945 and now called the Palmer House Hilton.

Over the next few decades, Chicago's elite gradually moved into the area around Astor Street, named aft

er one of the richest people in America at that time, John Jacob Astor. Strangely he had no association with Chicago but the name was considered to give the neighbourhood a status of wealth, and walking down Astor Street recently it still certainly does.

In the early 1900's more and more mansions were built sapping space in the area so developers took to building high-rise apartment buildings instead. Today the Gold Coast still oozes wealth and success and the streets of N Astor, W Goethe and W Schiller have some very large houses on them indeed. Rarely do they go on the market, if they do a quick search shows them priced well into 7 digits. A friend of a friend, a realtor, showed a certain Ben Wallace around one of the houses when he first came to Chicago. He liked it, he paid cash, all $4.5m of it.

Away from the big houses, the Gold Coast is also the place to go out. The diversion of Rush Street, State Street, Wabash Avenue and headed off by Division Street is joyfully known around these parts as the Viagra Triangle. Sure there are plenty of older men out with their 'nieces' and plenty of, shall we say penis extensions parked up outside buzzing restaurants and late night bars. However this is a very fun place to bring visitors, there are some great restaurants, and people watching is at a premium, particularly in the summer months when head turning is an Olympic Sport along this stretch of pavement. 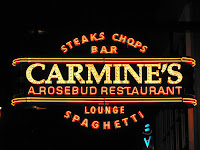 Gibsons is an absolute Chicago institution and is a must for places to eat in the city, Hugo's Frog Bar with their famous frogs legs is another. French-Vietnamese restaurant Le Colonial is a bit posh, but grab a cocktail upstairs or a burger at Johnny Rockets. And Summer afternoons watching the sights and sounds of Rush Street from outside Tavern on Rush or Carmines has to be experienced.

For window shopping and seeing what the latest fashions are on handbag dogs E Oak Street, E Walton Place and Rush Street are full of expensive boutiques with all the big designer names lining up next to each other. Barneys department store is also here as is Diesel and Urban Outfitters plus retro Adidas and Puma stores. I also like Flight 001, a great little find for travel needs or a gift. 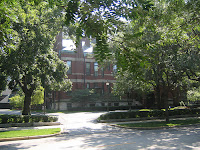 A little factoid that I love about Chicago's Gold Coast is that it was the original home to the Playboy Mansion. Chicagoan Hugh Hefner's little known company took ownership of a 70-room, 1899 built residence at 1340 North State Parkway in 1959. In the daring 70's, the man who lives in a robe divided his time between the Chicago mansion and a newer one in Los Angeles, eventually moving full time to the Californian one. The Chicago mansion (left) is still there, although no longer occupied by cute girls with bunny ears but divided into three family homes.

At the time the building boasted a brass plate on the door with the Latin inscription, Si Non Oscillas, Noli Tintinnare, translated as "If you don't swing, don't ring." You can still find the famous bunny logo on a brass plate in Chicago. Playboy Enterprises does still have it's corporate headquarters 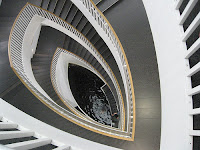 Across from Washington Square Park is the Newberry Library, it's free and open to the public. The Museum of Contemporary Art (MCA) is worth a visit, it's not huge but they have some good exhibitions. The building is pretty cool with it's crazy staircase (left), as you would expect and was designed by German architect Josef Paul Kleihues. A current exhibition is called Sympathy for the Devil: Art and Rock and Roll Since 1967 . A look at the relationship between the visual arts and rock-and-roll.

ough. Lake Michigan is the cities very own ocean. One of the five Great Lakes, 307 miles long and 118 miles wide, frozen over in the winter and a sultry magnet in the summer. Snowmen sit on the white covered sands in February, and beautiful girls playing volleyball run around on it in July.
Oak Street Beach 365 days a year is a striking and majestic place to stroll along and sums up Chicago's Gold Coast perfectly.
¶ 17:10