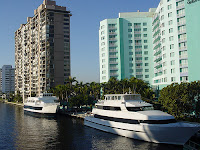 Well we saw the sun for the first time over Ft Lauderdale this morning just as we jumped in a car with blackened windows for the airport. The weather forecast for the island of Bahamas we are staying on is not fantastic but it will be rest and rest is what I need, although it would be a plus if I get to squeeze out some sun lotion.

Ft Lauderdale has a split personality depending on its visitors. Out of season conventioners, snow birds, young families and baby boomers take flight to the charming water inlets enjoying the Latin-influenced metropolis just 30 miles north of much busier Miami.

At other times of the year and if you plan on coming, please check your dates, young Americans descend on this, from what I saw tranquil resort, and despite what they tell their parents back in their suburban cocoons go absolutely mental. Benidorm with an American accent.

Ft Lauderdale is spring break mecca and beachside demeanour becomes teenage and college kid hell. Summer's are hot and humid, and its tropical climate also becomes a magnet for the odd stray heavy storm, and spotty kids making out on the beach I expect too.

Look out into Ft Lauderdale's piece of the Atlantic Ocean and you will see cruise ships and boats. This is a major yachting centre and keeping on the water theme, the International Swimming Hall of Fame is located on Fort Lauderdale beach. That is not the cities claim to fame though, that would be the world's largest drive-in movie theater, it has 13 screens!

'The Venice of America' it is known, and there are a lot of beach-shack type restaurants settled around the myriad of canals and inlets but a couple of better quality ones are Jacksons and Trina, although don't go to the latter if your starving or in a rush. I was told the famous Don Shula's was disappointing but there is a lot of food choices, especially around Las Olas Boulevard. And finally Elbo Room is a good place to get drunk and let your hair down after a long day stuck in a conference, allegedly.  ¶ 19:37