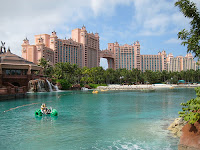 Bahamas has 700 islands and a further 2,400 sandy cays but most visitors only tend to visit a few with New Providence and Grand Bahama being the most popular. North Bimini island, just 50 miles east of Miami is a popular family and spring break destination for Americans and divers go to the eastern part of Andros, which has the second largest barrier reef in the Northern Hemisphere and the third largest in the world at one hundred and forty miles long, and has a drop off of over 6,000ft.

172,000 Bahamians live on New Providence Island, two thirds of the countries whole population. Nassau is the capital and traces it's beginnings back to the legendary days of pirates and shipwrecking. It has preserved some of it's 400 year history but Nassau and it's neighbourly tourist heaven Paradise Island is now home to large resort hotels, large investment houses and Americanization.

The American influence is a recent thing. First of all it was the Prohibition that turned the Bahamas into one big smugglers cove. After that was repealed in 1933, GI's during WWII came for a bit of rest, relaxation and rum and then the arrival of the jet-age brought wealthy families looking for a new holiday destination, particularly as Cuba was closed to our American cousins.

The final colonisation of Nassau has taken place more recently with the appearance of Starbucks, Burger King et al on each street corner.

The original inhabitants were Lucayans, a tribe of the Arawak Indians, who arrived i 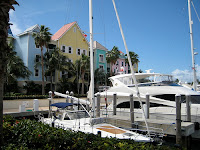 n the 9th century. They lived off the sea harvesting conch, still a popular local dish today. Columbus' first landfall in the Americas was on San Salvador, south and east of Nassau, on October 12, 1492. The Spanish enslaved the Lucayans, but got bored and left, whilst the native Indians fled.

The next era of history was one for the romantics amongst us. Separating the tall stories from the truth during the pirate era is tricky. The legend Blackbeard certainly ruled the waves, the self appointed 'governor of Nassau' struck fear in everyone he came across, setting light to his own beard to frighten other ships.

Pirates, government backed privateers and wreckers swarmed the Bahamian islands for a century from the 16-1700's fighting over treasures left by Spanish galleons and luring other ships headed to the new world, to the reefs so they could plunder their cargos.

Even under British rule, and despite the signing of the Treaty of Utrecht, which outlawed pirates, Blackbeard, Calico Jack and others continued to wreak havoc plundering ships of all nations making Nassau into a burghal of criminals, prostitutes, hobo's and vagrants.

With the help of the countries first Royal Governor, Woodes Rogers, Britain eventually flushed away the baddies and restored some order, created some laws and built Fort Nassau. However with the pirates went the island's main source of income and the country, now occupied by English Loyalists and former slaves from the United States, muddled along pretty poverty stricken until the American's rediscovered it. 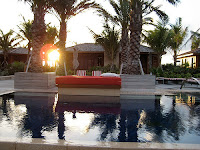 We stayed like many others on the 685 acres of Paradise Island, connected to Nassau by two high bridges. Originally called Hogg Island, a rich American aristocrat with the wonderful name of Huntingdon Hartford purchased the island and started to develop it in the 1960's. Donald Trump later bought it, but its now the property of South African hotel and casino magnet Sol Kerzner.

Paradise Island has very few permanent residents just thousands and thousands of holiday makers staying in one of the hotels on the island, the largest being the monolithic Atlantis, looking like an underwater space station sunk into the sand.

We stayed in The Cove at the Atlantis, the most recent addition to this über resort. The Cove is meant to be more contemporary than the other towers, and the lobby areas and bars are indeed designed in a minimalist style. Warning: the whole Atlantis complex is massive, so be prepared to do some walking, which is not on the face of it ideal for kids, even though it is families the resort tries to attract with it's kids club, water rides, aquarium and cinema etc. 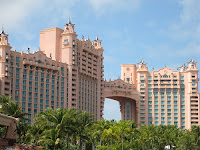 In fact I lay there one day by the pool thinking that the Atlantis has something for everyone. Kids, teenagers, families, oldies, couples, groups and businessmen are all catered for and this is great but I couldn't help think that the hotel didn't know what it really wanted to be. Some more gripes, everything is expensive, but don't worry the resort adds 15% gratuity for your convenience to everything to save you the bother, but it bothered me as I thought the service was best described as inferior. Not that the people that worked in the hotel (6,000 in total) were necessarily unfriendly, it's just that everything seemed a bit of an effort and cost and effort to me should reflect each other. I wonder if the $25,000 a night Bridge Suite (above as the name suggests) with it's 10 rooms gets any better service?

The Cove did have it's own adult only pool, which was nice although I don't know what the 50-somethings felt about the constant house music being pumped out of the speakers. Vegas it is not, alth 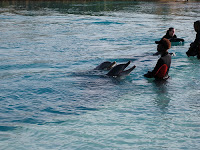 ough add some Dubai seasoning and it seemed to be the flavour the resort was trying to achieve.

The weather this time of year was just right, although it did rain the first day, but it was just the few days respite that was needed for me after a month of flying around like a saucer. It was a leisurely break although we did float around the casino one night but spent a total of $1.25, one afternoon I sneaked a massage, and another thing we did was Dolphin Cay.

Dolphin Cay is one of the largest dolphin habitats in the world. 14 acres of deep and shallow filtered waters where 26 bottlenose dolphins live and play very happily (the life expectancy of a human cared for dolphin is 3 times that of one that lives in the wilds). 16 of the 26 were rescued from Hurricane Katrina in a heart warming story. Two of the saved mothers have since given birth to newborn calves. 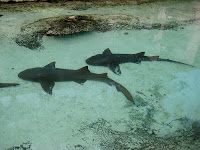 For $200 you get the chance to swim and play with the dolphins. For an hour of your time you're being acquainted and orientated, but you do spend about 45 minutes with the beautiful smiley creatures. It was a great, if costly experience, although a chunk of the money does go to a not-for-profit marine foundation.

The Aquadventure water rides are fun and who could turn down the chance to fly down a 60ft drop into a pool full of sharks? There is a rather scary reconstructed archaeological underwater maze called The Di 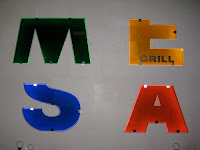 g and lagoons teeming with sharks, stingrays and piranhas. Or you could just lay in an inflatable ring and mosey down a lazy river which ran around the whole resort

The beach is very nicely kept and is private for residents, although areas such as the casino and restaurants are opened up to others. We ate in Mesa Grill (left) and Nobu plus Carmines in the colourful Marina Village, which was probably our favourite. Again, other than going into Nassau or buying snacks to eat in your room, you will spend a lot of money feeding yourselves at The Atlantis. In fact you may get more for your money and more protein out of the local cocktail specialties such as Bahama Mama, Pina Colada and Goombay Spash. The local beer, Kalik was decent too.

Nassau, from what we saw of it, didn't look too appealing. If we'd been there longer we would have taken some time to visit the Pirates of Nassau museum and Fort Charlotte, which commands an impressive view over Paradise Island. 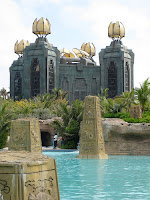 For old Nassau, the island's most visited attraction is the Queen's Staircase. 65 steps that were carved out of solid limestone by slaves in the late 18th century or see the flamingo-pink government buildings in Parliament Square, which we did get a peek at.

Plato recounted that Atlantis was a fortress island in the Atlantic Ocean that within concentric rings of water and land Atlanteans lived a life of harmony and abundance for many years until it was lost to the sea. Well the mythical lost continent has returned, sat impressively back on a sandy Paradise Island. Greek philosophy clearly doesn't come cheap but there is a lot to learn and fun to have in a sunny utopia for all ages.  ¶ 14:12