Centered around Cermak Road and Wentworth Avenue south of the downtown area near the Red Line 'L' train stop, recently the scene of a tragic accident, is Chicago's Chinatown. It was established in 1905 when a number of restaurants, shops and laundries (430 in total!) were opened by Chinese immigrants, many of whom had ridden the railroad away from the Pacific Coast.
The largest influx of new immigrants happened in the 1950’s and 60’s. The Chinese were coming to America in large numbers seeking a better life at this time largely due to adverse conditions in China but improved relations between the two countries.

Back then Chinese-American associations helped provide new immigrants with proper housing and jobs. Nowadays Chinese communities can be found all over Chicago, particularly the more established families but for most Chinatown is still home. 68,000 were said to live there in 2000 and I am sure it allows them to celebrate their own history as well as keep connected to the country they left, and I know all about that.

Most people visit Chinatown for it's restaurants and grocery stores. Home and professional cooks can find ever 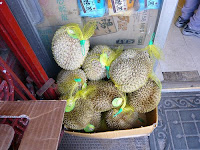 ything Chinese or Asian related in the food shops that spill out onto pavements on S. Wentworth Ave.

Festivals occur in Chinatown year-round and seeing at least one is a must. The New Year celebrations were in February (2008 is year of the Rat), the Chinese Autumn Moon Festival celebrates the day when the moon is the brightest and huge lanterns light the night sky. The Chinatown Summer Fair features cooking, live music, cultural dances and a Lion Dance Procession. Another traditional event is July's Dragon Boat Race for Literacy, held on the Chicago River. You can watch the race as you enjoy food, live music and people flogging crafts.

In August is the curious Miss Chicago Chinese Pageant. Curious only because I've never been! And in the Autumn is the Double Ten Parade, celebrating Chinese Independence with floats, marchers and of course an immense Mystical Dragon. What would a Chinese parade be without a big mystical dragon? The annual Chicago Marathon also takes runners through the neighbourhood in October as thousands take to the streets to cheer.

d. They are all a bit much of a muchness however Lao Sze Chuan is one of the classier joints. For a cup of tea and sit down, visit Tea Leaf Cafe, I recommend their coconut bubble tea or Mui's Feida Bakery (2228 S. Wentworth Ave) for great pastries and Chinese cookies.

A Chinese-American Museum (238 West 23rd Street) shows exhibits and puts on events and lectures but is only open Friday mornings and all day Saturday and Sunday.
Chicago's Chinatown is by no means the biggest and far from the best in the United States. However, walking around this little district is a glimpse into another people's world, where Chinese individuals from around the city visit for groceries, food, newspapers and a touch of home and tourists gawp, eat and get a tiny taste of where this amazing race of people have come from.
¶ 08:48