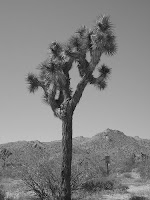 We only had one night in Palm Springs, about a 2 hour drive from San Diego but it was a good resting point for the long drive the next day to Sedona. Driving in you are met by thousands of energy wind turbine generators which powers the whole of Palm Springs.
Most of the population of this desert city call it a 2nd home as wealthy families take flight from the winters of Los Angeles and San Diego, however in recent times retirees have made it more of a year-round place meaning that businesses and restaurants no longer have to close-down in the summer. 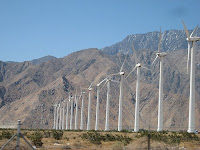 Famous and rich residents aside the largest land owner in Palm Springs is the Agua Caliente band of Cahuilla Indians, who have lived here in the year-round heat for almost 500 years and 300 or so tribal indians are known to still live on the reservation. You can visit the reservation and it's various canyons and resorts and spas.

We arrived in the afternoon and chose to take a ride on the world's largest rotating tramcars at the Palm Springs Aerial Tramway. A 10-minute journey began at the nicely named Valley Station, just a short ride from the main town, and took us up North America's sheerest mountain to 8516 feet (2600 m) above sea level.

The ascent takes you past five different life zones and the temperature dropped considerably once we disembarked the tram at Mountain Station. The views up top were incredible. Mt San Jacinto's snow covered peak was clearly visible. From different viewing points you can see across the Coachella Valley and have a Google Map like view of Palm Springs.

At the summit there is the compulsory array of crap restaurants plus gift shops and a visitors centre as well as numerous walking trails. The Aerial Tramway was certainly a good decision.

The two main arteries that supply the bulk of non-residential activities in Palm Springs are North Palm Canyon Drive and North Indian Canyon Drive and the night we were there the roads were closed for a street festival. Palm Springs is also noted for it's gay and lesbian influence and it was pretty evident, particularly at dinner on an evening that the city's restauran 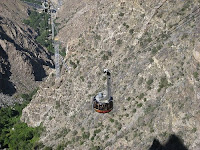 We chose Copley's for dinner predominately because it had an English chef (Copley himself) and the restaurant was situated in what was the former estate of Cary Grant. Sat outside in the front garden of Cary Grant's house under a sky full of brilliant lucent stars in the desert, it was the best meal I'd had for some time.

The next day after an excellent breakfast in our tired but once I am sure, bewitching hotel we made tracks for Sedona but after an hour made a brief stop at the Joshua Tree National Park. Any U2 fans will have the hairs on the back of their necks stand upright at the thought of being stood in a desert in front of these amazing yet very peculiar beings.
The trees only grow in the Mojave Desert, which occupies parts of California, Utah, Nevada and Arizona and are almost impossible to age as their trunks are made of thousands of small fibres and have no growth rings. It is thought that some maybe 1,000 years old. It was slightly surreal standing in front of them snapping away in the desert heat but I had a wide smile as we got back in our car and zapped up the air-conditioning.
"Desert sky
Dream beneath the desert sky
The rivers run, but soon run dry
We need new dreams tonight."
¶ 16:58