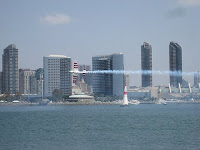 San Diego is beautiful, but it really wasn't always like that. The Great Depression put pay to it's progress after the gold rush and economic growth never came to this small outpost just north of the Mexican border. However the aviation and maritime industries did come in the 1920's and 30's finally giving the city a jumpstart and then in 1935, as the Depression waned, San Diego staged a huge exposition touting itself as the first port of call for ships heading north from the new Panama Canal. Architects chose to showcase a Spanish-Colonial style and the success gave San Diego a lot of impetus.

Following the bombing of Pearl Harbor, the headquarters of the US Pacific Fleet was moved to San Diego. The boom in wartime activity transformed the city - vast tracts of instant housing appeared, public spaces were turned into training camps, storage depots and hospitals, and the population do 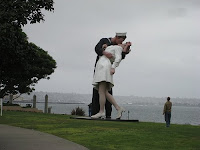 ubled in a few years. The city's wartime role and the associated publicity more than anything else put San Diego on the American map. Post-war, the naval and military presence provided an expanding core of activity, employing up to a quarter of the San Diego workforce. There are still 165,000 active personnel based in San Diego today, the largest naval base in the world. Honestly though bobbing about on a boat in the ocean, you wouldn't even know the navy existed apart from the huge USS Midway, now a museum and well worth a few hours visiting plus take a glance up at the 25ft high statue 'The Kiss' which stands next to the 972ft long war veteran (left).

Naval towns attract certain night time activities and other than sailors San Diego didn't hold much pull to anyone else. However since the 1980's this part of southern California helped by a lovely climate, investment in good public transport links and a beautiful coastline has gone through a gentrification frenzy.

It was my first visit to San Diego and I purposely avoided taking my passport so I would have no excuse to travel the 20-odd miles over the Mexican border to Tijuana, which 300,0 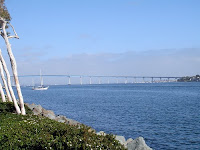 00 visitors do every day at the San Ysidro point of entry to drink, dance, eat tacos and buy cheap drugs (both the legal and illegal kind). I knew if I found myself crossing that border on a works do, only bad things would happen!

Like all my favourite cities San Diego asks to be walked and is served by an excellent trolley system, plus the airport is only 10 minutes outside of the downtown area. A ferry service also crosses to Coronado every 30 minutes.

Coronado, Spanish for 'the crowned one' is connected to the mainland by the 2.12-mile Coronado Bay Bridge (above) as well as by a long, narrow spit of sand known as the Silver Strand. We drove over the bridge the practice day of the Red Bull Air Race (incidentially won by Englishman Paul Bonhomme), which provided some very eye-catching moments (very top right). Coronado is certainly worth a visit to see it's tiny sandy beaches, quaint restaurants and it's enchanting but very expensive houses, one of which is the summer home of Senator John McCain. The Hotel del Coronado, one of America's most famous hotels, has a colourful history and was the backdrop for the Marilyn Monroe film 'Some Like It Hot.' 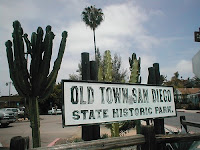 ace worth a drive out to is La Jolla ('The Jewel' in Spanish), a seaside community, full of character with spectacular seafronts and endless choices of fine shops and restaurants. For golfers the Torrey Pines Golf Course is nearby, venue of this year's US Open.

The downtown of San Diego itself encourages walking and it's historic Old Town should be a place to start your exploration. There are many tours that help you experience the original settling place of the Europeans on the west coast of the new world. The San Diego State Historic Park blankets a good chunk of the area and San Diego's history is well preserved here with a treasure chest of things to see and do.

Balboa Park is not just a park either, containing a junior theatre, golf courses and the city 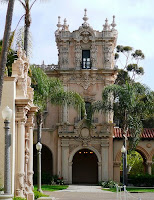 's famous zoo home to 4,000 animals. Through the middle of the park runs a wide promenade called El Prado. Along here are situated many museums including the San Diego Museum of Man.

Little Italy offers a lot more that Italian restaurants, although an anti-Mexican protest being carried out by some assorted white trash outside the Mexican consulate was more than we bargained for. Little Italy has a thriving arts and home design scene and is easily accessible by trolley although a visit to Sea World to see Shamu probably needs a car.

I stayed in the Gaslamp District and this is where most of the cities hotels and nightlife hang out. Once home to sailors looking for some onshore action, the area became the major focus of redevelopment in the 1980's and accelerated by the popularity of Horton Plaza, a shopping mall built in 1984 and named for Alonzo Horton, a San Diego visionary.

A new baseball stadium for the Padres completed the areas regeneration in 2004. A game was going on whilst I was there and the stadium had a very welcoming appeal looking over the bay with the sun beating down on a full house.

Most of the restaurants and bars centre around 5th Avenue, although most were occupied by businessmen with expense accounts so it is worth investigating some of quieter streets. The best meal I had was at Candelas on 3rd Ave. Annoying although hangover diminishing, the bars did shut at 1.30am, which surprised me. 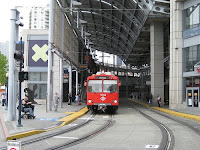 Hotels trip over themselves in this part of town to encourage both out-of-towners and locals into their establishments with pool bars, roof top bars, live music and all kinds of frivolity, although the Hard Rock Hotel beat them all on the day I arrived when it was hosting a pool party - walking around there on that Sunday afternoon was a sight for sore eyes let me tell you. Who said conventions were boring?

I really liked San Diego and it's mix of beach bum surfer dude, grown up business city and culinary high-life. There's a lot of history here and they showcase it very well, all walkable and you're rarely out of sight of the Pacific Ocean and the warm sun.  ¶ 19:49