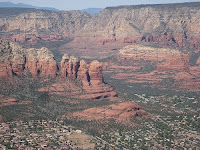 As a kid Sunday afternoons used to be taken up watching old cowboy and indian films on television with my Dad. Those westerns took place in a dreamy bygone era hard to imagine sat on the carpet with Dad in south-east London. Sedona is that place.

Over 100 films were made in or near Sedona, most after the 2nd world war, and in striking colour. The 1941 film Billy the Kid, Burt Lancaster's Apache was filmed in 1954, The Comancheros with John Wayne was filmed in 1961 and the original 3:10 to Yuma in 1957. Hollywood loved Sedona and whole film sets were built and dismantled amongst the beautiful red rocks but in 1950 only 350 people were said to actually live in these gorgeous canyons.

Sedona was once the sole preserve of indian natives and wildlife. The creeks were jammed with trout, and deer and bears were everywhere in the forests, making pathways to the creeks. Plants were lush and bountiful but life was hard for settlers and the land, though bountiful, was unforgiving. 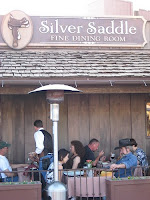 European settlers came to farm and mine but they lived a precarious existence, hunting, fishing, and farming a few acres to keep food on the table, few families stayed and it wasn't until 1951 a groundwater aquifer under West Sedona was discovered and it opened the way for several new housing developments. Retirees became attracted to the area. Other new residents came for the spiritual and reflective atmosphere, and slowly an artistic community was formed. Sedona didn't actually get it's first mayor until 1988. You can visit the Sedona Historical Society, which is open daily ($3 admission) for more on Sedona's 350 million year story. 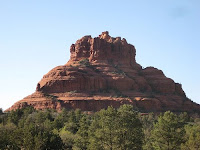 Sedona's setting is absolutely beautiful. Driving north from Phoenix red-rock buttes surround you on all sides with eroded canyon walls, and mesas rising into bright blue skies. With a wide band of rosy sandstone predominating in this area, Sedona has come to be known as red-rock country, and at sunset, the rocks put on an unforgettable light show that is reason enough for a visit. Oh, that and the ribs at the Cowboy Club.

The Cowboy Club with the Silver Saddle Room (above right) next door was a must. Heads of various beasts cover the walls, cowboy hats are a prerequisite and cactus, rattlesnake, elk and buffalo can be found on the menu. The ribs were mighty good though.

The main road does have a bit of a tourist trap character to it, and from what I read the outskirts of the city is in danger of being overdeveloped. However with drop-dead scenery all around, too many t-shirt shops is not going to ruin any photos. Away from Main Street though, some better souvenir hunting can be found at Tlaquepaque.
In recent years resort hotels and spas have found their way amongst the red-rocks. Sedona is a hideout for people looking to come to relax and seek their inner-self. We stayed in the Amara Resort and Spa, the rooms were ok, but the red rocks of Oak Creek Canyon butt up against the pretty hotel gardens. We ate in the restaurant, where the service didn't do justice to the food but it was over expensive. 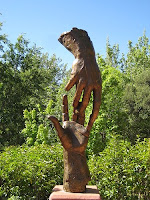 Sedona has long been a haven for New Age believers, who come to experience unseen cosmic energy fields known as vortexes. The vortexes are such a powerful attraction that many New Age types have stayed in the area and have turned Sedona into a hotbed of alternative therapies. A Tibetan Buddhist shrine is erected in west Sedona. The 36-foot-tall stupa is up a short path that winds through juniper trees festooned with prayer flags and is visited by devout Buddhists.

The art scene is more suited to the tourist looking for a mantlepiece trinket than fine art, although there is an Arts Center. The surrounding rugged canyons have many trails and are popular with cyclists. Another way to get around is on the Sedona Trolley but the best way to explore the red rocks is by Jeep. You will see Pink Jeep Tours' pink jeeps everywhere and were recommended to us, although we didn't take the offer up.

We used Sedona as a base to get us to the Grand Canyon, but the place is deserving of it's own story because this is a remarkable place. Stare at the rock formations long enough you'll see all kinds of shapes, the most obvious being Snoopy Rock, and Bell Rock (above left). Stare even harder at those amazing red rocks, rugged canyons with their forests and ponderosa pines and imagine those Sunday afternoon cowboy and indian films.
¶ 14:21