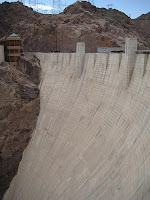 Route 66, America's Main Street was established in 1926 and begins at Chicago's Lake Shore Drive and travels 2,448 miles westwards across the country to Los Angeles. It was officially taken off the list of highways by the authorities in 1985, but since the 1990's the historic road has seen a rebirth as preservation groups with the help of some cities and states have brought big stretches of Route 66 back to life.

Route 66 has been immortalized in literature and music. John Steinback called it the 'M 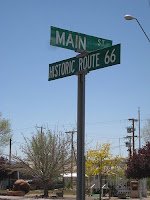 other Road' in his book The Grapes of Wrath about a family forced from Midwest land and their journey out to California. Nat King Cole sung about getting his Kicks on Route 66 and Charlie and Raymond in the Rain Man drive it from Cincinnati to Los Angeles.

We decided to follow them and picked up the famous road at Flagstaff, lying at an altitude of 6,990 feet and just north of Sedona's beautiful red rocks. Our final point was to be the neon lights of Las Vegas, arriving there by driving over the Hoover Dam.

In The Grapes of Wrath the Joad family packed everything including their two pigs, which they killed to make a barrel of salt pork to live on, into their battered old car. This I thought was a bit extreme and we decided to stop for gas and some pick n mix instead. We drove west out towards a town called Williams, which is where on my last visit to the Grand Canyon we got stranded in a snowstorm. 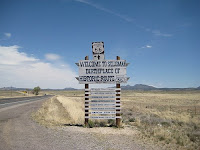 s is famous only for it's Amtrak train station, which is a stopover point between Chicago and Los Angeles. Why anyone would ever train this journey I'll never know. Williams as my brother will tell you is not famous for it's nightlife!

There are many long stretches of isolation on Route 66 and one of them starts after the quirky town of Seligman. 456 people live in Seligman according to the sign and from what we saw, they all owned a Harley Davidson, a leather jacket and long greasy hair. This was another 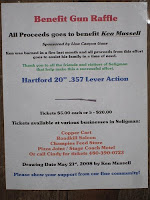 one of those 'do people actually live here?' moments and although slighty gimmicky, Seligman was a fun place, if not a little bit scary.

We had a coffee at the Roadkill Cafe, fortunately we didn't stay for dinner as they were having a gun raffle that evening according to the posters (right). We then walked around the Rusty Bolt, a befuddling and awe-inducing collection of what some would call old toot. I did actually purchase a Route 66 roadsign for my office though!

We left Seligman, after filling the car up and made our way down to the mountains of Kingman before turning of America's Main Street and heading north on US Route 93 to the Hoover Dam.

Named after the project's chief exponent Herbert Hoover, the 31st president, when completed in 1935 it was the world's largest concrete structure (now the Grand Coulee Dam in Washington). The Colo 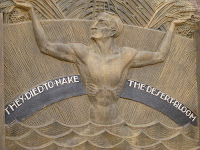 rado River flowed merrily along it's 1,400 mile course between the Rocky Mountains and the Gulf of California for millions of years but as America's west got settled it often flooded and I'd imagine was right pain in the bandanna back in the day. So to protect the low-lying lands some of the countries best engineering brains planned to control the river.

First of all the river's water had to be divided among the seven states it serves. This treaty was called the Colorado River Compact and it paved the way for the dam construction to begin in 1931. The completed project came in below budget at $49m and two years ahead of schedule, however one of the world's most famous engineering marvels came at a cost. 112 workers lost their lives. 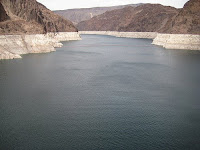 ether by a system of vertical keys (think giant lego set). More than 5,500,000 cubic yards of material was excavated. The countries largest lake and reservoir, Lake Mead was created at the same time and provides much recreation, although to see the 'bath tub' lines high above the water level (right) is evidence that the lake is currently only half full to capacity caused by a combination of drought and the increased water consumption in Las Vegas. Climate research says Lake Mead could be gone by 2021 (more)
Despite the dam being open for 73 years there doesn't appear to be any end to people's fascination with it. Certainly modern dams are higher and generate more power but a much needed new bypass is under construction to ease traffic and when we drove through on a Sunday afternoon there were people everywhere trying to find an angle to snap the best photo or walking across the state line between Arizona and Nevada.
There is a visitor tour but at $11 each we declined as I read it wasn't worth it, however seeing the dam in the flesh is, because photos will not do this man-made wonder justice.
¶ 19:00