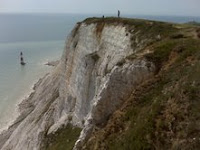 My 11 days in England, spent predominately at my parents near Eastbourne was fantastic, only wetted by the tears that my son and I shared when we separated on Sunday. Hard is not the blimmin' word.

My Mum & Dad live less than 5 miles from Eastbourne and it is a perfect base to explore the surrounding East Sussex countryside. The Miniature Steam Railway at Lottbridge was full of grandparents and kids alike riding the little gauge steam train around the beautiful countryside, as was the Holmes Hill pottery studio, the result of which I now have a colourful pirate sat on my desk at work. The Arlington Reservoir is another idyllic place to walk and is a haven for trout fishing.

Why many south coast towns are depressingly decrepid, Eastbourne in the shadow of the South Downs thrives with a busy and colourful seafront. For my son the beach and the sea are a constant magnet but this time we had a good chance to explore some other parts a little further afield. The tiny seaside village of Pevensey Bay, with it's medieval castle and Roman fort was one such place, the fish and chips weren't half bad either and at the westerly end of town sat at the foot of the South Downs is a charming little village known as The Meads. Beautiful houses, sparkling views, a couple of enticing pubs, and some nice places for a cup of tea and a sit down was enough for me to be looking in estate agents windows.

For sheer magnificence though head no further than Beachy Head. 530 feet above sea-level, the views from the chalk cliff are amazing. Famed for having two lighthouses, but only one in the water after the 1828-built Belle Toute lighthouse was decommissioned 9 years ago and moved onto land in one piece to prevent it from succumbing to coastal erosion. 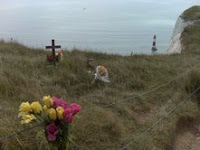 lar and can get busy, however sat on the grass looking out into space, despite the amount of people there last week it can also be a quiet place for reflection. Since the 1600's Beachy Head has had a sad reputation for suicide and over 20 people jump to their deaths here every year, while many are talked out of it by the Maritime and Coastguard Agency and volunteers. A telephone box with details of the local Samaritans and the national helpline was installed 30 years ago but crosses and flowers mark spots as a sad reminder of those that ignored it.  ¶ 13:45