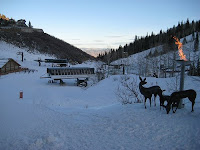 In 1847 Brigham Young led the first band of Mormon pioneers from Illinois, where they were mistreated and misunderstood to Salt Lake City and the state of Utah. At this time Utah was in the hands of the Mexicans and there wasn't much here apart from barren deserts and stunning mountains, but this was exactly what the Mormans were looking for so they could practice their religion without interference and persecution.

150 years later and there still isn't a lot here with vast parts of the state uninhabited. 80% of Utah's population live along the Wasatch Front, centering around the state capital, Salt Lake City and it is here that The Church of Jesus Christ of Latter-day Saints has it's headquarters.

In the late 19th century over 70,000 Mormon's were said to have come to Utah, but later the construction of the first transcontinental railroad and the precious metal mining boom brought many others and economic growth. Nowadays summer and winter outdoor recreation is the major reason why people visit the Wasatch Range, the most populated area of the 13th largest state in America and a long, narrow mountainous stretch running from the north to the middle of the state.

In 2002 Salt Lake City proudly hosted the 2002 Winter Olympics, commonly regarded as one of the most successful in recent times and the area has high hopes that it might be selected again in the future. And it was the Olympic Slalom and Freestyle Mogul course that took me to Deer Valley recently, well not really but Ski Magazine had voted this the best ski resort in the US for 3 out of the 4 years so it had a lot to live up to.

Deer Valley is just a short drive from the nearby artsy Park City and was originally used for skiing by the mining community (many of the runs are named after the old silver mining claims) but was only developed into a resort in 1981 by an American ski enthusiast called Edgar Stern. He died recently but he would have been very proud of the legacy that he has left behind. 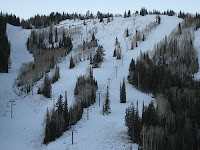 A few things stand Deer Valley out from other ski resorts. They prohibit snow boarders, they groom the snow every night from the minute the lifts shut until they re-open in the morning, there are over 500 snow cannons making manmade snow scattered around the 99 runs and the resort limits the amount of lift passes sold each day to avoid overcrowding.

Overcrowding wasn't much of an issue for us, the odd 'B celeb' aside, taking part in the annual Celebrity Skifest outside our hotel. Hardcore skiers were sensibly waiting for the odds to improve on the snow, and the Sunday was dead, something to do with 60% of the state being Mormon, but it was perfect for us. I once again had lessons each day and was happy to bound around the bunnies and greens. A more zealous skier would have got bored with only 6 runs open however.

Six mountains make up the resort, with the highest elevation being Empire at 9,510 feet and the total ski acreage is over 2,000. Boredom would not be an option later in the season I can assure you. All around the resort are tiny lodges and villages full of ski shops, accommodation, cafes and restaurants. The lunch facilities at both Snow Park and Silver Lake were excellent and not overly pricy. The Mariposa restaurant nestled within the Silver Lake Lodge was superb and we ate the best meal we've had since leaving Chicago. The house special Sablefish dish was to die for. 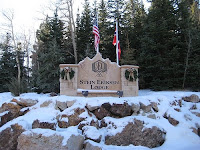 We stayed in the Stein Eriksen Lodge named after the, I was going to say famous but I'd never heard of him, Norwegian skier and gold medalist called funny enough, Stein Eriksen. For 50 years Eriksen has lived in the US, and has made Utah his home and although the hotel carries his name and flaunts about, no exaggeration, 250 framed photographs and artwork of him, he doesn't have any ownership in the business. The hotel does have an impeccable position perched on the mountain just a short downhill ski from numerous ski lifts.

Fireplaces burn away in every nook and our second room was very hospitable (our first room was shit and we asked to move), and the Glitretind Restaurant (named after a, er famous mountain in Norway) served good breakfasts and a fine meal one night we were there. But.... you knew there was going to be a but didn't you? The service in the hotel, the restaurant, the bar, the concierge was absolutely shocking.

The hotel did run free shuttles every half hour though into Park City, which I liked. Park City was a mining town containing some of the richest silver mines in the world. Between the death of the mines and the birth of skiing Park City was a ghost town, but not anymore and as a constant reminder there are over 1,000 miles of silver mine workings below the slopes at Park City and Deer Valley.

Actually beyond Main Street in Park City there isn't an awful lot to gawp at, outdoor malls and mountains aside, but at 7,500 feet above sea level Main Street represents a nice amble amongst boutiqu 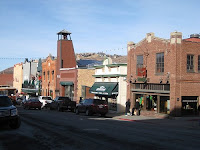 Phoenix Gallery is located in a beautiful building showing contemporary work, sadly the Park City Museum (middle of photo left) was closed for renovation when we were there but the Egyptian Theater has a packed calendar of interesting performances and has been here since 1922, and although this building looks slightly out of place the remainder of Main Street still retains that look of an old mining town.

We had a fabulous meal in a restaurant called Purple Sage. Beautifully decorated, this old 1895 telephone exchange was cozy and intimate and the food superb. By the way regarding the bars, Utah is not a dry state but many strange and antiquated laws exist. Most of the bars on Main Street can only sell alcohol to 'members.' Once in a bar, you will be offered membership on an annual basis or just weekly, it's normally only about $3 to $4 to 'join.' Restaurants can serve booze because they are providing food but watch for some hotel bars or cafes that insist that you eat as well as drink, not ideal if you're about to go somewhere else for dinner!

The main annual event and for what Park City has become synonymous for is the Sundance Film Festival, which takes part every January. Robert Redford, who lives at the Sundance Resort began this coming together of independent filmakers and actors in 1978 and it is grown beyond recognition. For 10 days as I understand it, Hollywood and it's entourage comes to the slopes and venues such as the Egyptian Theater and the Park City Library are used and 200 films are shown.

A free Trolley bus runs up and down for what seems the whole day and a ski lift can take you from the bottom of Main Street up to the ski resort (snowboarding is allowed here). 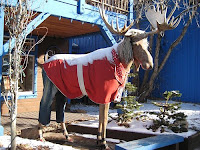 Main Street provides a much better après-ski experience than Deer Valley, if like me you yearn for that cold beer after a day twisting and turning your legs and hips into positions they are usually unaccustomed.

Deer Valley may have been voted the number 1 resort, and perhaps to the aficionados it is fully deserved. I actually preferred Beaver Creek in Colorado, and to be honest the service in the hotel did countenance this, but even so Deer Valley is a beautiful resort and Park City is a sophisticated and charming town.  ¶ 14:23