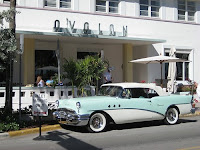 Looking down from the window of the airplane coming into Miami's International Airport, Miami Beach looks like someone has placed a line of dominoes along the coast of this 18 square-mile string like island only attached to the mainland by clogged up roads.

Miami Beach is famed for it's Art Deco, 800 buildings were listed on the National Regi 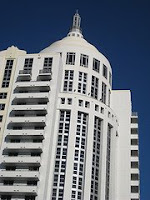 ster of Historic Places in 1979 thus meaning that there are some beautifully restored buildings particularly along stretches of Ocean Drive and Collins Avenue but equally there are many Art Deco buildings in a serious state of disrepair, which the economy is doing nothing to improve.

Once the northern part of Miami Beach was where all the rich and famous used to hang out but in the late 1980's a huge renaissance occured in South Beach incidentially not long after the crime series Miami Vice ran it's course and for a over a decade South Beach has been the colourful mecca for partying, fashion, museums, boutique hotels and long pristine beaches.

There is an incredible hotel scene in South Beach, each hotel trying to outdo the other in the trendiness stakes. Bar hopping from about 14th to 5th Street on Ocean Drive will open your eyes to a number of nice and perhaps unusual distractions, Many of the more famous hotels are situated on Collins Avenue a couple of blocks inland of the Atlantic. The Shore Club, Delano, the art stuffed The Sagamore and The National with it's famous 200ft outside pool are all worth a nose inside. 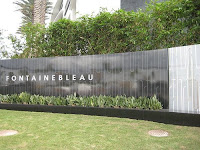 From the very bottom of Miami Beach you can walk from the popular surfers beach at South Pointe Park all the way along the boardwalk for about 8 miles. It is a cracking way to exercise and people watch.

The stroll up the Beach Boardwalk north past the famed Lummus Park allows you a chance to nose into all of the hotels behind gates and surly security guards. Some glamorous but many dilapliated. Three hotels that survived the credit crunch are the Gansevoort, sister to the one in New York and the renovated Morris Lapidus designed Fontainbleau, where I spent almost a week. The third is the W, which is nearly complete. The roof bar at the Gasenvoor 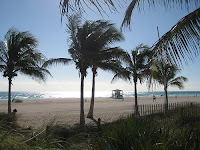 t is worth a visit, although it ain't cheap. For cheaper accomodation the South Beach Hotel did the trick for my mates and I, right opposite the Bass Museum of Art on 21st St.

The beach itself is popular and sandy and very wide. Many families and couples were out on the beach sat around the groovy lifeguard towers when I was there on two not very warm weekends. Collins Avenue runs parallel with the beach and it is here that the annual Miami International Boat Show was just getting started when I was there and some of boats on display were 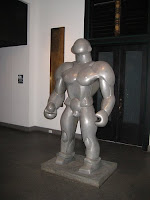 the richest baubles you'd ever seen. Whisper the word 'recession.'

Turn off Collins Avenue for two of my favourite streets. Lincoln Road is a miscellany of pedestrianised shopping and eating. Something for everyone tastes down here plus the recently restored Colony Theater and the Symphony Hall at the Lincoln Theater. 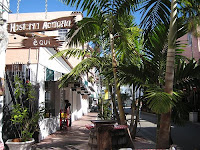 On Lincoln Road all the restaurants look enticing but hold your appetite until you reach The Van Dyke Cafe and the Hosteria Romana (right) was good too, but go hungry. For less glitz and more character a few blocks away on Collins is Española Way, which is a little piece o 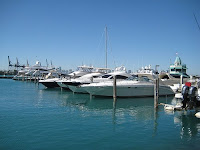 One of my personal hobbies is staring, or should I say people watching and there is plenty of that in Miami Beach. From the fashionistas to the old ladies carrying their tiny dogs, the shiny Harleys and immaculate muscle cars, to the curious world of the large Jewish Orthodox population. It's arty, it's so cosmopolitan that you would have thought you'd left the USA, it's loud and proud. Just make sure you wear your sunglasses.  ¶ 21:50