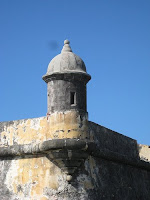 It's a been a while since we were in Old San Juan, and what a beautiful little place it was. We flew to Puerto Rico from Miami in February and stayed in an ocean fronted town called Carolina, which was close to the airport and a short cab ride away from El Viejo San Juan, or Old San Juan.

Established in 1521, San Juan is the second-oldest European-founded settlement in the Americas (after Santo Domingo) and the oldest under US jurisdiction. Shoehorned onto a tiny islet that guards the entrance to San Juan harbor, the atmospheric 'Old City' juxtaposes historical authenticity with pulsating modern energy in a seven-square-block grid of streets that was inaugurated almost a century before the Mayflower laid anchor in present day Massachusetts.

Surreal sounds and exotic sights resonate everywhere. Blue cobblestones glistening in the sunlight, the rythmic sounds of a salsa stanza drfiting out of welcoming narrow bars, busy people not knowing if they are Spanish or American walking quickly down to the harbour, and the omnipresent roar of Atlantic breakers battling mercilessly with the sturdy 500-year-old fortifications of El Morro, which protects this wonderful city. 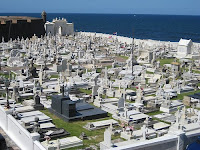 Old San Juan is more than a dizzying collection of well-polished colonial artifacts, but it is a great place to start. Fort San Felipe del Morro was named in honour of King Phillip II and the fortress was restored in 1992 to its historical form to coincide with the 500th anniversary of the discovery of Puerto Rico by Christopher Columbus. We decided against entering it's maze of tunnels, dungeons, barracks, outposts and ramps, but instead sat on the grass outside and watched kids fly balloons and listened to the sea crackle against it's timeworn 140-feet high and 18-foot thick walls.

Alongside the ocean is the Cemeterio de San Juan. I'm not usually one for cemetaries but I was obsessed by this one. It's elaborate tombstones against a backdrop of ocean and sky was very picturesque. 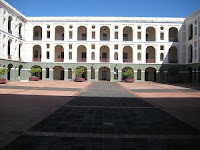 The city includes more than 400 carefully restored 16th and 17th century Spanish colonial buildings and there are many must-sees. El Cuartel de Ballajá, once a barracks for the Spanish militia is now a museum and is a beautiful example of Spanish architecture (left). The Iglesia de San Jose (San Juan Church) began construction in 1523 and oversees the Plaza San Jose. 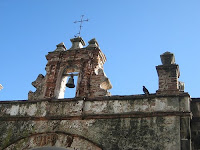 The Calle Del Cristo is a famed and atmospheric street with the Capilla del Cristo (right) chapel at one end not far from the San Juan Gate, the ancient entrance to the city built in the late 1700's and one of six heavy doors that used to be shut at sundown to protect against invaders.

Just before the San Juan Gate explore the Hotel El Convento, a beautiful hotel and previously a convent built in 1646 and converted to a hotel by Mr RF Woolworth of Woolies fame. It has a great little bar. The imp 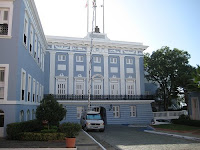 ressive Teatro Tapia is on Calle Fortaleza, another street that must have gone through hundreds of reincarnations but one constant would have been the formidable La Fortaleza (left), the almost 500-year old Governor's Residence, all 170 of them have lived here including the incumbent and free tours are available.

The Paseo La Princesa is a tree lined walk with gardens, benches, and street vendors. The promenade takes you along the outside of the city wall and hosts varying art displays, an open air photographic collection took precedency when we visited. Walk to the end and 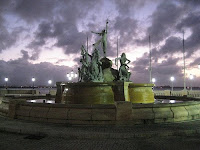 throw a couple of coins in the The Raices Fountain and make a wish to come back to this hauntingly beautiful place (right).

It is at this end of the city that the huge cruise liners bring tourists into Puerto Rico and accordingly this is where the tourist centre is, an impressive building called La Casita (Little House), it's not particularly little.

Walk back up anyone of the cobbled narrow streets into the heart of the town full of squares, the largest being Plaza de Armas on San José Street. The fountain features four statues representing the four seasons. Plaza de Colón is named after Colombus and the Plaza de San Jose is a favourite meeting place with a bronze statue at it's centre of Juan Ponce de León, the great Spanish explorer and first Governor of Puerto Rico.

Old San Juan has a very good dining and bar scene and as not to disappoint we gave a few places a little once over. We had dinner at Toro Salao, a tapas place with a beautiful outside setting, then drinks at the lively Parrot Club. The food came recommended but we just got stuck into a few margaritas even though the place is known as 'la casa del mojito' - the home of the mojito. I once had a bad m 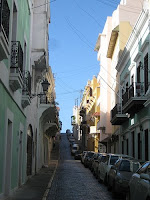 ojito experience so I ducked them. On certain nights the Parrot Club has live music too.

Earlier in the day we threw ourselves back in time we visited La Bombonera. For decades it was a rendezvous for the island's literati and for Old San Juan families. But even now old men were haunched over cups of thick black coffee gesticulating wildly with their hands. Pop into La Bombonera if only to try the homemade flans and watch the surly old man behind the counter, who I reckoned has worked here since La Bombonera opened in 1902.

For more than flans and tapas the area located between Sol and Norzagaray Streets, is la Calle San Sebastián, known for it's nightlife and in particular the Café Hijos de Borinquen (51 S 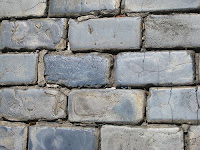 Old San Juan's colonial architecture and blue cobblestone streets (right) with it's colourful buildings and hanging ornate balconies seemingly tilting over, almost touching those on the other side of the street make you feel like you have gone back in time, yet Old San Juan has all the trappings, the best bits of America too.  ¶ 11:31