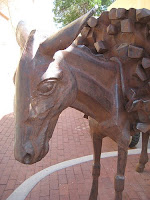 If you're an artsy fartsy person then Santa Fe is for you. If you are interested in American history, then Santa Fe is also a place for you. If like me, you are interested in meandering around a beautiful and intriguing small city with great restaurants, and an air of sophistication sat at the foot of sloping mountains, then you too should visit Santa Fe.

I liked it, I really did. It reminded me of a cross between Santa Barbara and Sedona with Mexico thrown in for good measure. To all intents and purposes it is Mexico but sat in the contiguous United States. Meanwhile a good sprinklering of Native Americans bring an historical and enriching element to the city, New Mexico's state capital.

Spanish colonists first settled in these parts 400 years ago. They didn't take into account the power of the Pueblo Indians however, who drove the Spaniards out of the area in the only ever Native American uprising in 1680. The Spanish took it back in 1893, and then the city came under Mexican rule in 1821 before being being claimed by the United States after they declared war on the Mexicans in 1846. In 1912, New Mexico became the USA's 47th state, with Santa Fe as its capita 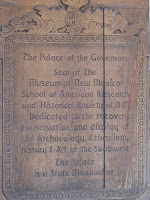 l. The Palace of Governors still today resides as a memory of those various seats of power, and is considered to be the oldest continuously occupied building in America. It is now an exhibition centre and $7 to go in.

Out front of The Palace of Governors facing the shady Plaza can be found Native Americans selling arts and crafts from very early in the morning. Once teeming I'd imagined with traders, livestock and farmers the Plaza is now a place to sit, meet friends and people watch, and is the universally accepted point of orientation. From here stem crooked streets with Pueblo-style architecture, many buildings centuries old and some a lot newer but thoughtfully built ask to be explored on foot.

There are a lot of museums, the oldest being the New Mexico Museum of Art that celebrates the region. Not far from here is the Georgia O'Keefe Museum, O'Keefe was an abstract painter and a major American artist. O'Keefe died in Santa Fe in 1986 and the Museum in her name was opened 11 years later and is an impressive building. From here a walk down Grant Avenue will give you a good slice of some older and well cared for Santa Fe homes. Burro Alley, once the city’s bawdy nightlife district now features some neat cafes and a statue of a Burro, a small donkey that were used to carry goods around the city. 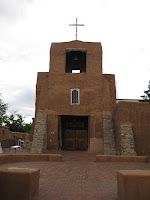 rds up San Francisco Street past pottery shops, jewellers and the Plaza and staring down at you is the grandiose Cathedral Basilica of St Francis of Assisi with it's round towers beckoning you towards it. Most of the stained glass windows came from France, and the building is a mixture of architectural styles. Adobe and French-Romanesque. Out front is a statue of St Francis of Assisi dancing on water and Kateri Tekakwitha, the first Native American to be made a saint.

Loretto Chapel was around the corner, with the mysterious staircase. DeVargas Street has it's own history and many superlatives, some of which I have considerable doubt over. The narrow road heading east away from the Old Santa Fe Trail contains both purportedly the oldest house in America and the oldest church.

San Miguel Mission Church (left) has original adobe walls and altar built by Tlaxcalan Indians who came north from Mexico with the Spanish in 1620. This area was formerly known as Barrio de Analco, and I did expect any minute to see a cowboy and indian shoot out. At 215 East De Vargas Street is a sign hung on a house calling it the oldest house in the United States, built circa 1646. Underneath was a sign pointing us to the Oldest House Shop and ATM. Quite naff. All that is truly old was the foundation. We took a photo and moved on. Besides from the 10 major museums, there are also over 200 galleries in Santa Fe and the bulk of these can be found on Canyon Road. You don't have to be an art collector to appreciate the ambience of strolling up Canyon Road with it's mix of trendy upscale galleries and folky art shops interspersed with inviting cafes and restaurants. A car may have been handy here, particularly when it rained but one would miss the pretty houses with hidden gardens and statues. It is about a mile walk, and of course a mile back.

Seven miles north of the city is the famed Santa Fe Opera, recognised as one of the countries leading cultural centres but in the middle of nowhere, a longer stay would certainly have encouraged a visit. Whilst on things we didn't have time to do, how about the Santa Fe Southern Railway. A 4-hour round scenic desert trip to Lamy on a historic freight train. 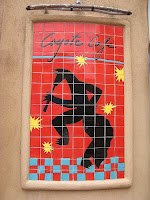 d close to the Plaza at the Inn of the Anasazi, a southwestern styled small hotel not perfect but it served us well, especially Sean the Bermudian working on the front desk who couldn't believed we were in Santa Fe.

We had booked dinner in the Inn of the Anasazi but cancelled it when we realised the superb choice of cheaper options in the city and we picked well. Two wonderful Mexican restaurants that I would wholeheartedly recommend. Firstly The Coyote Cafe, but the rooftop Cantina not the sparse restaurant. On a Wednesday night it was packed, lively and fun and the food was excellent. The next night we came across Los Mayas, a pretty courtyard restaurant hidden slightly on West Water St, but busy with tourists and locals alike. The grilled chicken was fantastic, and the two guys on guitar chef Roberto and cousin Fernando made the chili pepper decorated margaritas taste all the better. Breakfast was equally as fulfilling at the Plaza Cafe. A New Mexican funky menu, bottomless coffee and a step back in time diner atmosphere. I loved the sign on the wall listing important phone numbers including President Obama's.

We picked Santa Fe because we had heard it was very different to many of America's small cities. It was. The temperature was perfect and it had a nice feel with a rich history and I loved it's laid back gait, which was what was required as it might be the last time we'd be on our own on holiday for a long time. Gulp! 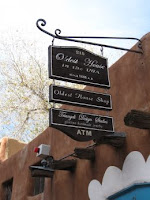 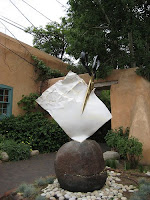 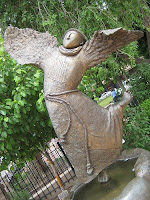 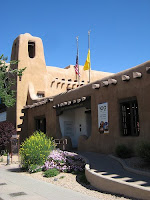 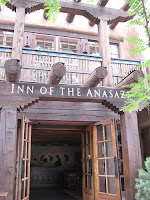