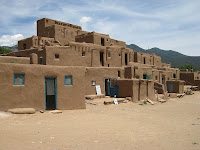 It came as a surprise to me to find out that Santa Fe was actually over 7,000ft above sea-level. And a drive to Taos 90 miles north via the celebrated High Road takes you even higher firstly to Chimayó, then Cordova, a fine place for authentic locally produced wood carvings if you need some. Next stop was to an 8,000 foot mesa called Truchas, about halfway between Santa Fe and Taos. In-between farmlands and badlands, this is an old New Mexican town, whose families looked to have lived here for ever. Peering over it is the 13,000ft Truchas Peak.

The Picurís Pueblo is next where the 375 Tiwa citizens consider themselves a sovereign nation with their own tribal council government. The people of Picurís have been here since 750AD and interestingly own both the Picurís Pueblo Museum as well as the Hotel Santa Fe located in the capital's historic downtown area. Not bad work if you can get it. 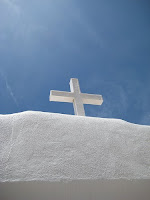 This drive to Taos is about two and a half hours but it can be done following the course of the Rio Grande (below left) via State Road 68 and that's only about an hour. The town of Taos has a lot of history with plenty of galleries and shops to peruse and even a ski resort but the sole reason to visit is the 1,000 year old Taos Pueblo a couple of miles north of the city.

Taos is considered to be the oldest continuously inhabited community in the USA and is part of a 95,000 acre reservation with a wider population of 1,900 but realistically only a 100 or so Native Indians actually reside on the pueblo where no electricity or running water is allowed within the pueblo walls. 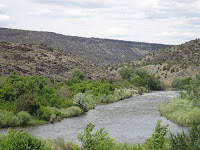 The Taos Pueblo is also self-governed and the conservation and preservation of it's history and culture is considered sacred. It is said that the Taos community is one of the most secretive Indian tribes, and with schooling done on the reservation by tribal members very little is known about these very conservative and religious people who ancestors archaeologists say lived in this valley long before Columbus discovered America and for hundreds of years before.

Standing in the dust looking at the adobe homes side by side and piled up on top of each other was a stunning sight. At one time the only entry way into the homes was by ladder t 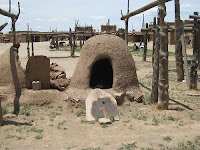 hrough an opening in the rooftops. These entrances guarded against intruders and was additionally a source of light. The adobes have doors now but the ladders remain. The walls of the adobe, several feet thick, are made solely of clay, straw, sand and water. The exterior of the houses are restored annually while the interiors are coated with washes of white earth to keep the rooms bright and clean.

Most of the adobe's were selling all kind of crafts. I always find it so frustrating that you can go to one of earth's most fascinating places and yet all of the goods are made elsewhere or in bloody China! Not here. Everything is made by the man or woman greeting to you as you walk into their homes. Pottery, moccasins, drums, sculptures, paintings and jewellery were all great gifts to cherish 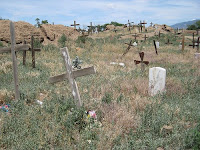 plus the yummy Fry Bread, baked each morning in outside Horno's (above).

We spent a good 2 hours wandering around the pueblo. Just beyond the old wall boundary was the ruins of the original San Geromino Church, with just the desolate cemetery left to stare at and then the new (built in 1850, so hardly new) San Geromino Church with finely carved wooden beams within it's roof.

All around drying racks stand upright from the barren ground, once used for drying game and harvests as well as hides. Then the fast running Red River Creek runs through the middle of the 30 or so adobe buildings dividing the pueblo in half. The creek is the sole source of drinking water for natives, and kids are seen carrying little pails of water to-and-fro to the homes. 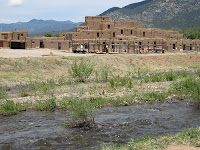 High above in the Sangre de Cristo Mountains is the sacred Blue Lake, where this crystal clear creek water enamates. The Blue Lake was returned to the Taos people by the US Government in 1970 after a long history of struggle and people outside of the Pueblo are forbidden now to go near the 48,000 acres of wilderness.

Most of us consider Europe or the Far East to be home to this kind of history but Taos Pueblo is very much part of America's ancient history. Visiting this Pueblo was a great experience and I'm glad we made the drive up from Santa Fe. The $5 camera fee was a bit of a piss take to be honest, but for 10 bucks it was well worth a peak into a different world from a different time.
¶ 13:07