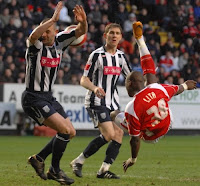 And that's the most galling thing isn't? Look at the results today. Only Hull and Ipswich won at the top of the table. I mean bloody Hull are the form team by miles, in fact they are about the only team in form in the top 10. Bloody Hull. I ask you....

Frankly anyone down to Preston could still make the play-off's, although they are probably looking over their shoulders. As for us, Pards has admitted at least that his tinkering and adding to the squad has jeopardised our chances of a play-off place. I'm still finding it hard to accept, although plenty of others have, that we won't be there at the denouement. It is still in our own hands.

Yet yesterday watching the game in the pub, the Setanta commentary trying to compete with the barman's favourite mix tape and the chatter from the lunchtime crowd, promotion seemed a bit of a passing fad even though we didn't play too badly.

I mean the effort was there, blimey even Thomas looked up for it, but what happened to the quality, the passing game, attacking with pace up the pitch and how about a decent forward pass into space or an enticing cross? Oh yeh, that was West Brom. They were better than us weren't they? A lot better.

Do you know that we have picked up 26 points from 23 games, that's half a season and relegation form. What has exactly happened? It can't all be to do with the recent loan signings can it? Without Reid there is no creativity, our movement is pedestrian without Varney, McLeod, Dickson or Sam. And without Youga or Moo2Kil we lack that youthful exuberance up and down the wings.

I like Semedo but alongside Holland we just have two tidy up, short passing players. Thatcher has an allergy to crossing the half-way line and Halford, although a lot better yesterday, has a right foot defaulted to just hoofing the thing forward.

However for large parts of the game I thought we held our own against a far better footballing side. Paddy and Sodje were excellent at the back but beyond that we had no cutting edge. Lita and Gray spent the whole game with their backs to the goal and then Lita was taken off for Iwelumo and cue long hoofs. In the last 10 minutes the possession was something like 30/70. Can't we get that Kevin Phillips bloke in on emergency loan?

Who was at The Valley: Charlton Athletic Online; Kings Hill; Drinking During the Game; Blackheath Addicted; Addicks Championship Diary; A Red Divided.
Reports: Sky Sports; Times Online; Independent; cafc.co.uk; Baggies.com.
What did Pardew think of it: We need to win four or five of our last six games to give ourselves a chance, we're more than capable of doing that but I'll admit we're fighting for our lives to stay in contention of the play-off places."
A bottle of fizzy pop for: Paddy McCarthy. The first building block to form a team around for next season's promotion campaign.  ¶ 20:47