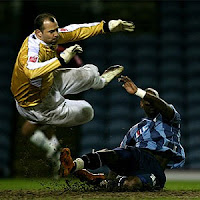 A correct decision made. That would have been a very, very long journey home and I had to be at Heathrow early this morning to work on a report. A take-away at a mate's house, out of the howling wind and rain, a couple of 1664's, Sky Sports and a good night's sleep were in hindsight an unusually grown up decision.

From what I've read it was a better performance, although frankly a worse one would have been challenging.

I don't understand why Pardew opted to forget the 4-5-1 formation that has won us most of our points on the road, and play Gray and Lita. Both look out of sorts, Lita because he is match-rusty and Gray because he plays like a rusty 1974 Ford Cortina. Obviously booing ex-players and then seeing them play a blinder and score only happens in SE7.

Another defeat then albeit to a superb goal but seeing the crowd of 10,780 pop up on Sky last night brought home a few truths. There are plenty of examples of teams and their fans, who came down with great expectations of a new beginning in our division having a reality check. I think mine has just hit me over the head.

However we're amazingly still 5th but a whole host of teams lie below us with games in hand and probably an easier 4 upcoming games. Our season could well be defined by the time the final whistle goes at Home Park in just over 3 weeks time.

Addicks at Turf Moor: Addicks Championship Diary.
Reports: BBC Sport; cafc.co.uk; Clarets Mad.
What did Pards say: "We've been in the top six all year. What you need in that last few games is form, that's the story of the play-offs."
A bottle of fizzy pop for: The 300 Addicks at Turf Moor, braver and better men than me.  ¶ 16:00