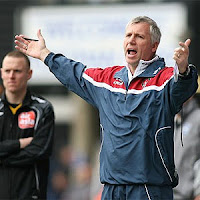 Nope. That didn't work. Thought I would sleep on yesterday's result. Even knocked a few pints back yesterday pretending to be Irish like to rest of America.

If I was a neutral studying the table, form guide and the remaining fixtures I would no way have us down to finish anywhere near the top 6. I would keep my money firmly in my pocket. Even the 'come on this is Charlton, anything can happen' rationale is wearing a tiny bit thin.

And as for Pardew's "we will be stronger in the 2nd half of the season" bollocks, well has he not seen the history of our form in the last 10 games this last decade, last season included when we won twice? What we need is another pre-season with the amount of new players he has brought in, not a run into the play-off's.

At this stage of the season it is not about performances, although I understand yesterday's was better, it is about results, goals, clean sheets, consistency and confidence. I don't know where any of these are going to come from and neither do I think does Pards. We look shot, while others look hungry.

Three defeats on the trot for the first time since October, the lowest league position since the season bloomed in late August, a sudden dryness in front of goal and all the creativity of Blue Peter without any sticky back plastic.

Some luck would come in handy but so would a shotgun, please someone put us out of our misery.

Addicks at Portman Road: Doctor Kish; All Quiet; Charlton Life.
Reports: Newshopper; Sporting Life; Times Online; Daily Mail; cafc.co.uk; Those were the days.
Well Pards?: "The balance of the side is so delicate at this level and we're not quite right at the moment."
A bottle of fizzy pop for: Jerome Thomas. Someone told me he was up for it. Well whooppee-bloody-do, that should have been in August.  ¶ 13:27